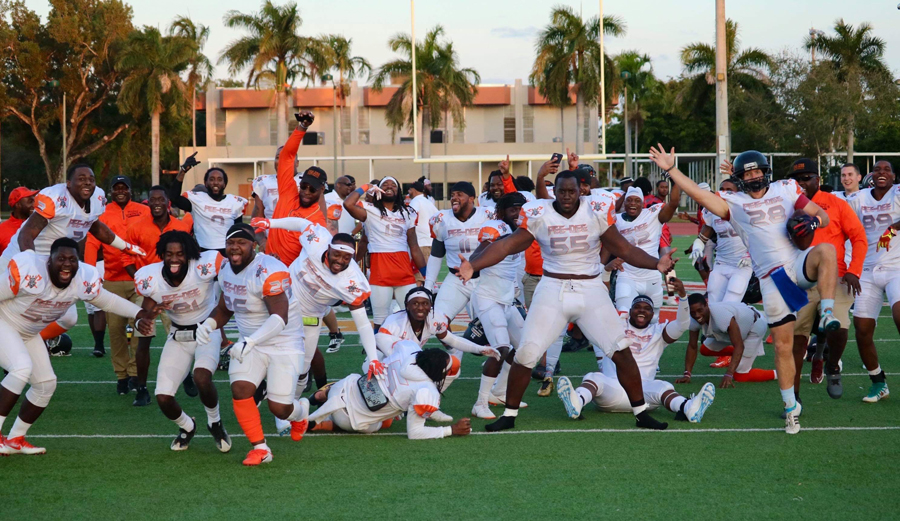 The Pee Dee Vikings semi-pro football team will need to make some room in their trophy case as the Darlington-based crew won two more pieces of shiny hardware after another outstanding season.

Head coach James “Jay” Charles said the year started great and only got better as the Vikings amassed a 9-3 record for their regular season in the Central Carolina Football League.

“We went to the championship game against the Triad Outsiders from High Point, North Carolina, and it went to double overtime. We ended up losing by a field goal, 9 to 6,” says Charles.

“It was a well-fought game and we had a lot of standout players – too many to mention. All season long, our boys gave their all,” says coach Adrian Benjamin.

But, despite the disappointment of barely missing the league crown, the Vikings had one more shot to come out on top.

“The top two teams from each league every year get invited to a national bowl game in Fort Lauderdale, Fla. They matched us up against the Connecticut Mustangs, and we won 16-6,” says Charles. 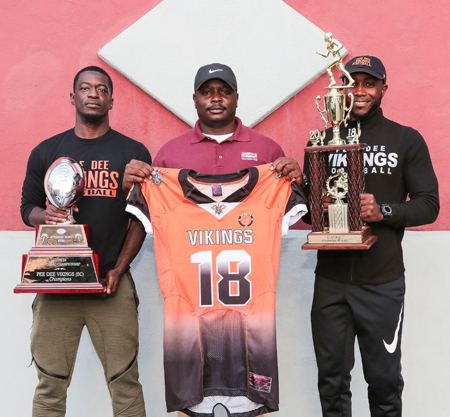 “To be a second year team and win 10 out of 13 games, and playing teams that have been in the league for 10 years, they’re now looking at us like we’re one of the top teams to beat. That’s a major feat,” says Benjamin.

Charles says the Vikings’ winning team chemistry may be rooted in familiarity, since many players took the field together in high school, college, arena football, flag football.

Benjamin says that a share of credit must go to Charles himself – a hard-driving former player who emphasizes fitness and practices in step with (or ahead of) his team.

“They respect (Charles) because they know he played college, played arena. He knows the drills and can still get out there and run with them now. When he tells them to change something up or play their position a certain way, they listen to him. That takes you far,” says Benjamin.

Coach and running back John Mills says that kind of commitment is key to keeping the Vikings inspired and energized, and that spirit transfers over to their families and fans.

“I have my family there in the stands, and it’s a game I love, so once I have their support it’s all in. Wherever I’m at, they are at,” says Mills.

Fan support has increased over the Vikings’ second season, with strong regular attendance and the occasional guest appearance by the Darlington High School Falcons marching band. Charles says the team is grateful for the support of Darlington Area Recreation, which upgraded bleachers, concessions and restroom facilities at Virgil Wells Stadium to host their home games.

The Pee Dee Vikings are gearing up for another season, with tryouts this past weekend and a grueling summer of practices ahead. If you’re a fan of gritty gridiron action, make plans to attend a Vikings home game this fall. Tickets are just $5 each, and Charles promises an evening of high intensity football sure to entertain the whole family.