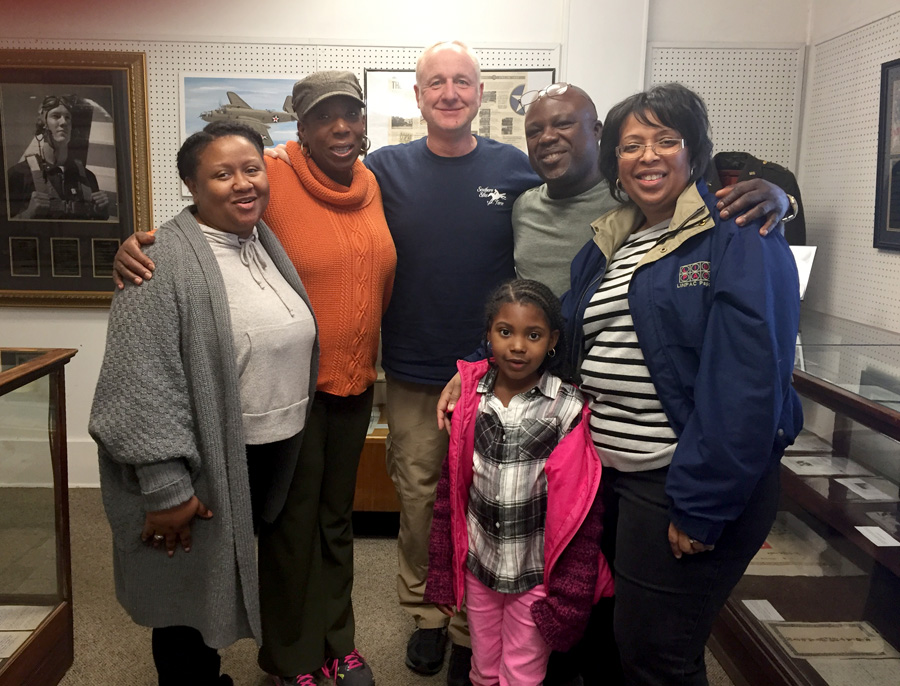 When Melissa Burch first got a message from a stranger asking for information on her husband’s family, she had no way of knowing that her husband’s ancestral history was about to change: They were about to meet a whole new side of the family that they never knew existed.

“The first conversation I had with them was Stephanie calling me,” Melissa said. “She said that she was given my number as the Burch Family historian, she is a Burch and she wants to find out more about her family. She understands that they come from South Carolina. I asked her what she wanted to know and she said ‘Well, first, let me tell you that I’m Black.’ When she said that I was kind of like, ‘Well, okay, what’s your point?’

Melissa said that with her husband having a military background, race was not an issue for them.

“We’ve been all over with the military,” Melissa said. “Because of that, rank was more important than race. It didn’t matter who you were or where you came from; it mattered what rank you where.”
Melissa said that Stephanie began telling her that she had watched the PBS special Blood and Soil: The American Epic and identified Elder John Burch as an ancestor. Stephanie was able to trace her family genealogy with John Burch back to Mt. Croghan, South Carolina.

“I asked her what names she knew in her family’s line,” Melissa said. ‘She started naming them off and I started hearing all of (my husband) Andy’s family’s ancestral names. There’s the Josephs, the Jameses, the Thomases. They are absolutely Andy’s family line; they all repeat themselves over and over through the lines. Well the minute she said those names, I told her that there was no doubt in my mind that she was family.

Melissa said that they didn’t know exactly where in the family tree Stephanie fit but she did, undoubtedly, fit. 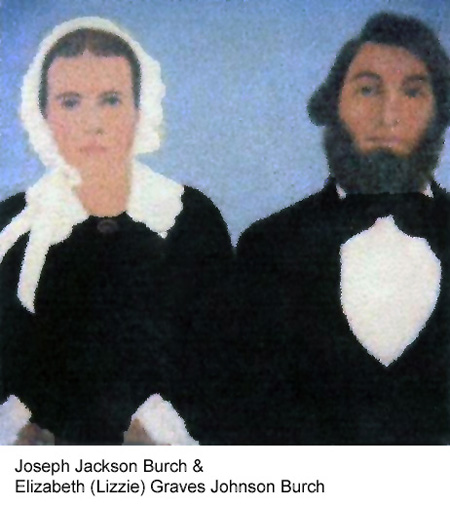 “There was no doubt that she was one of the Mt. Croghan Burches,” Melissa said. “The Caucasian Mt. Croghan Burches. There were six brothers who were born in the era of the 1820’s. They all went into the Civil War as Confederate Calvarymen.”

As the Burch Family historian, Melissa knows many of the names on the family tree. There was one, however, that she did not know.

“As she names all these names and tells me what she knows, she says that her three-times-great grandfather is Alfred Roland Burch,” Melissa said. “Well, there is no Alfred or Roland in our group so that was a different name. But he is born of Joseph Jackson Burch. Stephanie and some of her cousins wanted to come, see the area, go, look and learn. So we set up a time for them to visit and in the meantime, I was digging trying to find any Alfred, any Roland, and I couldn’t. Alfred’s children are all Joseph, James, all the Burch family names. So what he did is he named his children after his uncles, his grandfather and his father.”

As Melissa searched she enlisted the help of Darlington County Historical Commission Executive Director Brian Gandy. At their disposal is the Commission’s records room with umpteen birth, death, wedding, and land purchase records.

Gandy, who loves a good genealogy search, said that he was fascinated that they were able to uncover as much as they did. 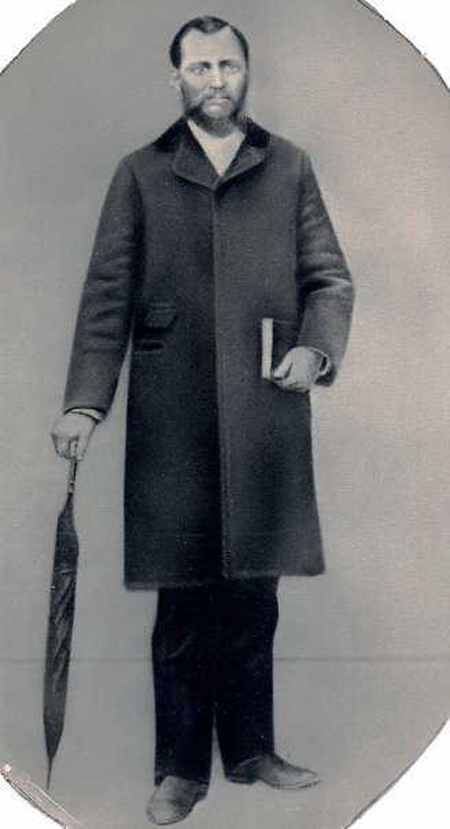 “In the case of the Burches, I like to think that based off of the connection, and the way that he left land, along with the information that remains, that it was a relationship type thing and not a property situation,” Gandy said. “We know that many slaves took on the names of their former masters or owners. We also know that some picked names of other people who had been kind and respectful of them. That is probably one of the most difficult periods to do genealogical work because the records are sketchy. They were not really worried about keeping records of where people come from and who they sold them to.”

Gandy said that the Burch family was prominent so the fact that land was left to an African-American male and not just known children said a lot.

“The hostilities between the Tories and the Patriots was eased in South Carolina and it was a direct result of the treaty that was signed on Joseph Burch Sr.’s property at Burch’s Mill,” Gandy said. “We know that he provided rations for the Patriot army. We have receipts from Francis Marion’s logbook where he did that. We know that he was very supportive of our efforts to become an independent nation based off of what he gave and the fact that his property was were they met. It was a pretty influential family back in the day.”

Stephanie said that she was interested in family history but began her Burch search when several elderly relatives asked her to look into their family’s history.

“In 2001 two of my great aunts, who are now deceased, asked me to see what I could find; they knew that I was interested in our family history,” Stephanie said. “I really didn’t know a lot being raised by my mother who is not a Burch but my mother had me in contact with them. I always knew about some of my relatives but I didn’t know their history, nor did they. If they did, they didn’t say too much for it. I didn’t start looking at the Burch side but when you’re doing research and you find something interesting about another side it is easy to veer off. I started doing research on both then.”

After coming to a stopping place herself, she sought help from friends.

“I started asking my geneology friends what I could do because I’m not an expert,” Stephanie said. “I gave them what I had and they would go on their resources. We all came back to one conclusion: this slave owner has a male child that is in his midst that is about my great-great-grandfather’s age. I didn’t really know what to make of that and I sort of took a break.”

A family reunion sparked her to begin her search again.

“We had a family reunion and some distant relatives, who I now know, showed up,” Stephanie said. “They lived 15-20 minutes down the street in the next town over and we didn’t even know it. They started asking me to look things up for them; it turns out they were at the same point in the search that I was.”

Facebook has become a great resource over the years, a meeting place for enthusiasts and seekers.

“I found this guy in North Carolina who handles the genealogy of Wadesboro and North Carolina, African American slaves,” Stephanie said. “On Facebook I somehow put in our Burch Family connection and got to a page of the Descendants of Joseph Burch and I got in contact with Melissa. I told her that I was looking for a slave list or anything they might have; I didn’t really know anything about who the slave owner was. She immediately started giving me information and said that she had a gut feeling that my Burch side was a descendant of Joseph Burch. I wasn’t really sure but I started talking to one of my older cousins and she said that our aunties wouldn’t really say much about their history; it was like it was a mystery. The only thing that they would say is that my great-great-grandfather Alfred Burch was the son of a slave owner.”

Stephanie and Melissa said that they both reached the conclusion that to have definitive proof of a family connection a DNA test was the way to go.

“The only way that we could find out if we were related to the Burch Family was for a male child to take a blood test,” Stephanie said. “Melissa’s husband Andy said that he would take the test because he really want to know and he really wanted us to be related. We had built a relationship just the few times that we were together talking. We felt really comfortable around them and I didn’t want to be let down so I kept saying ‘if’, if we are related. It has been a journey.”

Andy took a DNA test and sent it in for results. Stephanie’s cousin also took the test.

“I had my cousin Tyson take the test and I told him that I would pay for it and I wouldn’t put his name on it,” Stephanie said. “He did a swab and Andy did a swab and they sent it in. Andy texted me one morning at five o’clock asking if I was up. I was getting ready to go to work and I texted back asking if something was wrong. He said that he got an email saying that he found a match and he was scrolling down and said that it had my name; we were a match. We were related. So that meant one of two things, either my grandfather was his grandfather’s brother or he was his child.”

On a visit to South Carolina, Stephanie and some of her African-American relatives took part in an annual Burch Family Reunion. Melissa said that she wasn’t sure how the family who had been coming to the reunion for years would react, specifically the older generations. While there were some who didn’t come that year and others who were standoffish, most everyone was welcoming and enjoyed meeting the new cousins.

Stephanie said that the Caucasian family members were not the only ones with their reservations.

“I had some cousins who went with me to meet Melissa and they were really skeptical because they were on this politically correct black thing,” Stephanie said. “We have to get off that because it isn’t about that. This is about finding family history. What has happened in the past is in the past. We have to know our past but we have to move on from that. We finally know where we come from.”

Gandy said that he was happy to be part of the research and knowing that a family has finally found the origin that they’ve been looking for.

“There were already indicators that led to the belief that there was a connection rather than just ‘I knew this person’ and as a result of that, they were able to dig and through DNA they were able to secure the information and prove it,” Gandy said. “Now their family has expanded greatly. That particular period, as painful as it is in our history, there were numerous ways that folks took on the names of people. When you are able to secure documentation, DNA or whatever, that verifies a family connection it is sort of the glory find. For this particular family, they had been drifting around for a while and really had nowhere to call home. Now that they have found this very strong connection to this very patriotic family, historically patriotic, they have found some very deep roots and I am very pleased that they have done that.”