At the Nov. 21 meeting of the Darlington Kiwanis Club, guest speaker Bill Segars, a contractor, author and historian, gave a fascinating talk on the role of church burnings during the American Revolution. To sum up: it was a truly terrible idea. 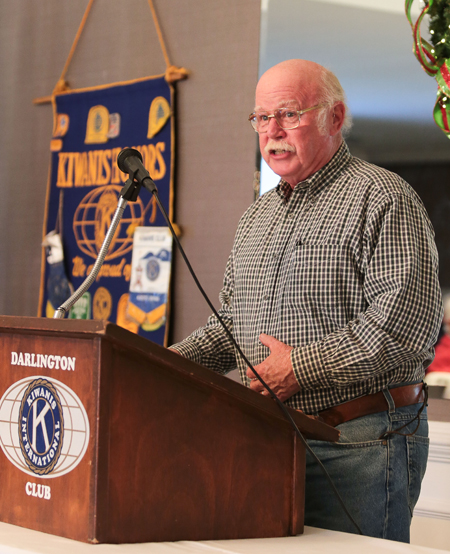 “When the British started burning our churches, they thought that would demoralize and intimidate the Colonists. But, in fact, the reverse happened. It caused them to be more enraged and fight even harder,” said Segars.

He said one root of the church-related troubles began with the 1704 Church Act, which established the Anglican faith as the crown-preferred church for all colonies. While the Church Act included language allowing freedom of worship, all non-Anglican churches were referred to as “dissenters.” An updated Church Act in 1706 established a number of parishes, each of which was ruled by an all-powerful vestry.

“The vestry handled the affairs of the church and also handled the political affairs of the parish,” said Segars. He likened their power to that of a deacon board and county council all rolled up into one body. The vestry also collected tax money from everyone – regardless of their faith – and used that money to support the Anglican church. The “dissenter” churches were built and maintained by their communities, and they received no benefit from these taxes.

“Herein begins the real problem. People did not like paying taxes for things they did not get the benefit of,” said Segars.

This resentment chafed early colonists who had come to the New World seeking freedom from religious oppression, and when the Revolutionary War at last began some 70 years later, the Redcoats tried to cow the colonists by attacking their beloved community churches.

During the war, six Anglican churches, five Presbyterian churches, and two Congregational churches were burned. Segars noted that other denominations – Baptist, Catholic, Lutheran – tried to remain neutral in the conflict.

Some of these historical ruins remain standing today, like Sheldon Church in Beaufort County. The church was being used by Colonials to hide confiscated British ammunition and thousands of pounds of gunpowder. When a loyalist named Andrew Devoe informed the British General Augustine Prevost about this in 1779, they torched the church and destroyed the cache.

Though the wood interior was burned out, Sheldon Church’s sturdy 24-inch brick walls and engaged columns (where the brick of the wall and column are interwoven) have withstood the test of time. The church was rebuilt around 1825, but was again gutted by locals who needed material to rebuild their homes after the Civil War. Though it is now fenced to discourage vandals, the site remains a tourist attraction.

Segars recounted the destruction of several other South Carolina churches that were damaged or destroyed by the Redcoats, such as Indiantown Presbyterian Church in Williamsburg County.

This church was targeted by Col. Banastre Tarleton, who was – in Segars’ words — “tired of getting whipped” and eager to quell the rebellious energy sparked by Francis Marion and fanned by fiery sermons from Indiantown’s pulpit.

“They deemed Indiantown Presbyterian Church a ‘sedition shop’ and immediately burned it to the ground,” Segars said. “However, again, that gave a lot of support to Francis Marion.

People volunteered to fight the British, they volunteered food and supplies to help, because the British had burned their church – a church that they built with their own hands.”

Though Tarleton earned his reputation as a ruthless military commander, often shooting enemy soldiers after they had surrendered, Segars noted that Hollywood depictions of Tarleton (as in the film “The Patriot”) inaccurately show him locking civilians in churches before setting them on fire. Segars said there was no record of the British committing such an atrocity, though what they actually did was awful enough to inspire the Colonials on their road to freedom and victory.

If you’d like to read more about this, check out “Churches in South Carolina Burned During the American Revolution: A Pictorial Guide” by Bill Segars and Jim Neal, which is available online and in bookstores.