As football season heads into a full tilt boogie, local sports lovers have a new option for exciting live gridiron action as the semi-pro Pee Dee Vikings take to the field each Saturday night. 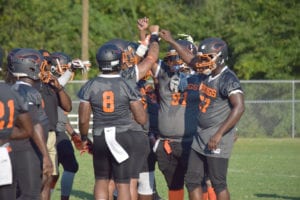 Founded in October of 2016, this is the Pee Dee team’s first season with the Charlotte-based Central Carolina Football League (CCFL), comprised of nine teams from North and South Carolina. For this initial ten game campaign, the Vikings came ashore with furious intent. With their latest victory on September 16 – a 20 to 12 triumph over the Carolina Thundering Herd – they have a record of six wins and two losses, and are currently third in the CCFL standings.

“We’ve been packing the stadium pretty good and it’s been growing every week,” says Benjamin. “We’ve been doing really well getting the word out through Facebook and just by word of mouth, and people are coming out to the games, bringing their kids, and watching grown men play football.”

Fans flock to the games from several towns away to see some hard-hitting action and to check in on favorite players who once wore the colors of their local high schools. When they formed last fall, the Pee Dee Vikings raided talent from all over the football landscape, culling players from Hartsville, Lamar, Marion, Darlington, and Timmonsville, as well as gridiron vets from Columbia and Charlotte. Benjamin says the fellowship and welcoming team spirit of the Vikings serves as a big draw for talented players.

“We conduct our team as a family, as one unit. We don’t do the ‘superstar’ thing,” he says. 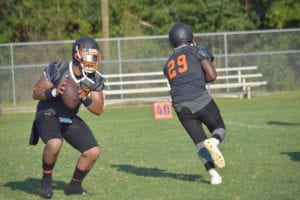 With only two more games remaining before the end of the season, the Vikings are poised to make the playoffs – an achievement made more special when you remember that this is their first year in the CCFL. Benjamin and Charles believe this excellent performance is a testament to the rich vein of athletic talent in the Pee Dee.

While many of the older players joined up to get back in shape and recapture the fun of playing a sport they love, some of the younger team members have their eyes fixed on the future. Charles and Benjamin say that they hope playing for the Vikings can hone skills, build confidence, and propel these younger players up to the next level in football and in life.

“There is so much untapped talent, and some of them can move on to play in college. Hopefully, some can even make it to the pros or Arena League. That’s how we’re trying to gear our program, to try and show some of the younger kids that this is a good start, but they don’t have to stop here,” Benjamin says. “Apply to some schools, try out at team walk-ons. We want our players to gain experience here and try to succeed at a higher level.”

Charles says that one Viking – Mike McCallister – has just finished his degree at Limestone College and is playing with the Pee Dee squad to keep his skills sharp before he leaves to play overseas later this year. Several other players are still eligible to play college ball, and Charles is working to ensure that they get enrolled and continue their education along with their football careers.

The team is also working with the youth football program of Darlington Area Recreation Department, coaching 9 and 10 year-olds and giving them a grounding in proper skills that can help them excel – and keep them safer – when they hit the field. Benjamin says the team’s future goals include greater integration with youth programs in local schools, with the aim of providing athletic outlets, mentorship, and positive role models for students.

Coach Charles says the Vikings want to feature more young local talent performing live during their home games, and anyone interested can contact him at 843-472-6088 or the Darlington Area Rec Department at 843-398-4030.
At their next home game on October 7, the Pee Dee Vikings will host the Triad Outsiders from High Point, North Carolina. Kickoff is at 7 p.m. and tickets are $5, with kids aged 5 and under admitted free. James E. Welch Stadium is located at 400 Wells Street in Darlington.

To learn more, visit www.ccfl2015.wixsite.com/ccfl and check out the Pee Dee Vikings on Facebook.