The Darlington Falcons’ nightmare football season continued this past Friday against one of its biggest rivals, the Hartsville Red Foxes.

Down to having to play running back Javorius Williams at quarterback because of injuries, Darlington was extremely shorthanded against what most consider to be the best team in all of 4A and with the Red Foxes fully loaded at their skill positions it was a mismatch from the start.

Hartsville scored two touchdowns in the first, second and third quarters each while scoring one in the fourth quarter. 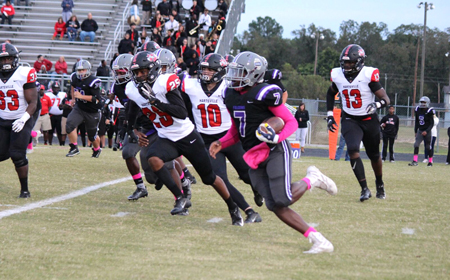 “I’m proud of my kids,” Hartsville head coach Jeff Calabrese said after the game. “We came out, Darlington fought, they had a crazy plan because they were out of quarterbacks and it was a good plan – you know putting big No. 7 (Javorius Williams) back there, we did not expect that, but our kids adjusted, fought and it was a good win for us.”

The Red Foxes’ first two touchdowns came from super back Collins Bishop, running in the first from nine yards out at the 4:37 mark and the second from three yards out with just over a second left in the first quarter.
Down 14-0, Darlington did not roll over. Early in the second quarter, Jordan English turned a screen into a 71-yard reception setting the Falcons up first and goal on the Red Foxes nine-yard line.

Looking to cut the Red Foxes two score lead to just one possession, Darlington got as close as the Hartsville six-yard line, but the drive stalled forcing the Falcons to attempt a 28-yard field goal.

Instead of getting at least three points out of the deal, Hartsville blocked the kick and Dejon Pinnacle returned it 82 yards for the touchdown, putting the Red Foxes up 21-0 and sucking any fight that the Falcons might have had left completely out of its sails.

“It’s kind of like the tale all year,” Darlington head coach John Jones said after the game. “It seems like you go back to Myrtle Beach, you go back to all these real good teams, all the ones that we are hanging in there, fighting and its close, it’s like one play changes everything.”

Hartsville capped off the dominating first half with Dariyan Pendergrass running in from 37 yards out for the score with 25.3 seconds left.

The Red Foxes picked right up where they left off in the third quarter.

Getting the ball to start the second half, Pendergrass scored his second touchdown of the game, taking the first play of the quarter 54 yards for the score.

After forcing a turnover on downs on Darlington’s ensuing drive following Pendergrass’ touchdown, the Red Foxes got right back on the offense, marching down the field with Bishop scoring his third touchdown of the game, a three-yard run putting Hartsville up 42-0.

Up by six touchdowns, the Red Foxes began to empty the bench and with less than two minutes gone in the fourth quarter reserve super back Darian McMillan scampered in from 29 yards out for Hartsville’s final score of the game.

Despite being down by such a large margin, the Falcons’ defense did not throw in the towel, forcing a turnover on downs with Red Foxes on Darlington’s 10-yard line with less than five minutes left in the game.

While this game was scheduled to be the last game of the regular season, the Falcons will play on the road this Friday to take on the Crestwood Knights.
Hartsville will take on Myrtle Beach at home this Friday with the winner claiming the region championship.­