Down South: Beautiful But Deadly 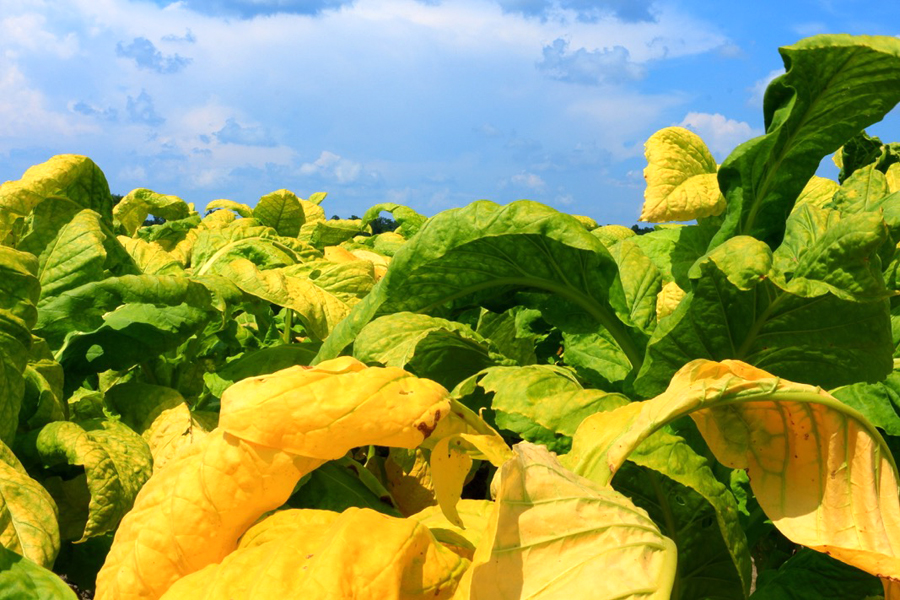 I was driving back from a speaking event in Lake City, the town that reinvented itself thanks to art and the vision and financial support of Darla Moore. Lake City was a tobacco town once, but we all know why tobacco fell out of grace. Well, don’t worry about Lake City. What a vibrant town, and when you drive around town you see all these warehouses. Those warehouses make for some fine art galleries now when ArtFields comes to Lake City each spring.

Those warehouses and their aged woods are beautiful, and so is the plant they were built for. Tobacco sure is a pretty plant when it’s all gold-green and spread out beneath that Carolina sun. I stopped to photograph a field of tobacco and as you can see, it’s colorful and luxuriant. Its deadly aspect doesn’t come across in photos like this one. I’m no tobacco expert. I never smoked, but I’ll hazard a guess that this is a field of bright leaf tobacco. Outside its beauty I have little interest in tobacco but I’ll take a stand for its place in history. Tobacco gave us those picturesque tobacco barns that still stand here and there.

Now that it’s been deemed a health hazard, farmers are growing hemp and other crops to replace tobacco. I recently wrote a story in South Carolina Farmer about efforts to grow hemp. And no, it’s not the type you smoke. Consider this column an anti-smoking effort. And just so some of you won’t launch an all-out attack on me as pro-tobacco you should know that my father died of esophageal cancer, and the doctors at MUSC in Charleston told him his early years of smoking unfiltered Chesterfields played a big part in his illness. No, I am no defender of tobacco for the way my father died was as bad as it gets. Twenty-two months with no voice: surgeons removed his larynx, and he ate through a stomach tube. I’ll be honest here. Death when it came was a relief.

Even so, I was talking to friends about how pretty a field of tobacco is and how beautiful the Pee Dee is and how much that region has lost to change. One lady told me, “While I grieve so much change, I don’t grieve the loss of tobacco. So much suffering, so many deaths, and terrible deaths, too. I recently had a health scare they thought was caused by second-hand smoke. Surely we can grow something else! This is not a loss.”

I agree with her and as I pointed out farmers are trying out new crops. But another friend had this to say about tobacco. “Fields of death, they are.”

True. My mother smoked a while when she was young and all those many years later, lung disease took her life. Smoking was something she did as a child, too. She smoked rabbit tobacco and grapevines. I’m sure it seemed daring and all grown-up-like. An old tale holds that smoking rabbit tobacco is good for the flu and colds. Hard to believe isn’t it. Inhaling hot gases into tender lungs just seems wrong at every turn in the road. As for smoking grapevine, you’d look for a hollow vine and strip away the leaves. Dry it a while and you had a crude cigarette. Smoke away. But! Let me warn you daring types. Don’t go smoking vines. Get hold of some poison sumac and you may end up in the hospital. Just don’t smoke anything, but can we admit that a field of tobacco is a beautiful sight, though a deadly one and a vanishing one, like so much smoke dissipating.

You’ll see fewer fields of tobacco in times to come. Its day has come and gone. But if you still smoke? Well, the odds are against you.

Tom Poland is the author of twelve books and more than 1,000 magazine features. A Southern writer, his work has appeared in magazines throughout the South. The University of South Carolina Press released his book, Georgialina, A Southland As We Knew It, in November 2015 and his and Robert Clark’s Reflections Of South Carolina, Vol. II in 2014. The History Press of Charleston published Classic Carolina Road Trips From Columbia in 2014. He writes a weekly column for newspapers in Georgia and South Carolina about the South, its people, traditions, lifestyle, and changing culture and speaks often to groups across South Carolina and Georgia, “Georgialina.”