Darlington wants to make last season a thing of the past 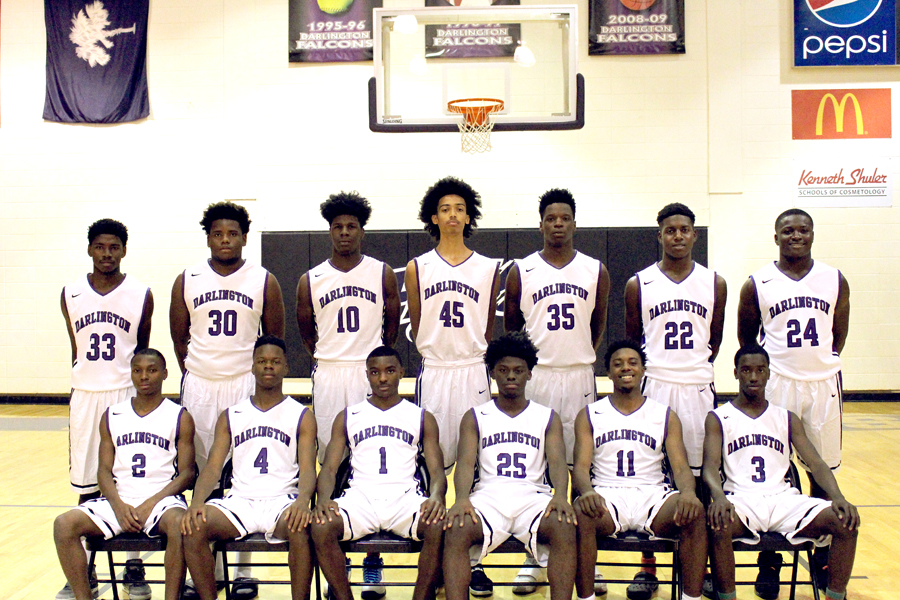 After having a very un-Darlington like season last year the Falcons are getting geared up for another basketball season with the hopes of getting back to its winning ways.

Despite making the playoffs once again last season the Falcons lost 15 games, finished third in a region it has dominated over the last few years and did not make it out of the first round of the playoffs.

Out of those 15 losses at least eight came with Darlington either tied or leading going into the fourth quarter. On top of that, most of the games lost in the fourth quarter were with three to four minutes left in the game.

So what happened, what caused the drop off of a program that had been so dominate in basketball for so long?

It was combination of youth and inexperience, missed free throws and the lack of free throw attempts in late game situations, and the absence of a player wanting to take over at the end of the game.

These problems derailed a season that could have had a much more attractive ending but that was then and this now and Darlington head coach Ken Howle thinks these problems might be resolved heading into this year.

First, let us start with the youth and inexperience piece. You might think that both go hand-in- hand and to a degree they do, but that is not always the case. Just because someone is young does not mean they do not have experience.

Going into this season, Darlington only has three seniors on its roster, along with six juniors, three sophomores and one freshman, but out of those 13 players, seven are returning from last year’s squad including point guard Tyshaun Johnson and freshman Tre’Quan Scott, who played as an eighth grader last year.

A difference from last to this year, however, is the new comers from the junior varsity squad. Players such as Kenyon Scott and Jamean Muldrow have really impressed Howle so far with their commitment to get better.

“They have had a great offseason and were committed to being here and I’m just real pleased with them,” Howle said.
The combination of the returning players and the pleasant surprise of newcomers has Howle confident in his team being better experienced and able to play with a higher level of confidence this season.

“We’re still young, but we are a little more experienced now. I think Ty will play a little more confidently this year and these guys coming up from the JV, they got confidence already, they really do, and they are going to grow tremendously this year I think.”

But the youth and inexperience from last year was just one piece of the equation when it came to figuring out what went wrong last season. Another major issue was free throws.

During those eight games when Darlington lost a late lead that ended up resulted in losing the game, it was missed free throws or a lack of free throw attempts that showed up on the stat sheet. Howle said that his team must drive the lane better this year and earn more trips to the charity strip and it begins with Kris’shawn Hickman, his senior forward.

Hickman is by far the best athlete on the team and in most cases probably the best player on the team, but last season he had a knack for wanting to pull up for a jump shot instead of challenging the rim and trying to draw contact in the lane.

“Kris’shawn is very gifted athlete, but he’s got to learn to play hard all the time,” Howle said. “He doesn’t play hard all of the time and we have got to have some trust in him to make the right decision at the ends of the games. He didn’t shoot a free throw in the last 10 games of the season, not a free throw and he is too good to not get the line and get fouled.”

If Hickman can fix this issue, he can easily become one of the most dominate players in the region if not the state, but it’s a matter of wanting it.

A key in doing that is having the desire to be the person with the ball when the game is on the line. Outside of last year that has not been a problem for Darlington, and this year it might not be either. It is just the source of where it is coming from that is the big surprise.

“We just have to be able to play the last four minutes of a game or three minutes,” Howle said. “We lost 15 games last year and I bet eight of them were in the last quarter and probably most of those eight were in the last few minutes. We really didn’t have a go-to guy, nobody really didn’t seem to want the basketball and I think some of this younger crowd, they want it.”

It is those types of things that have Howle confident in his team. Yes, they may be young, but this youth is different. Whether it is the young returners from last year’s squad or the young newcomers Howle feels his Falcons are in great shape to have a bounce back year.