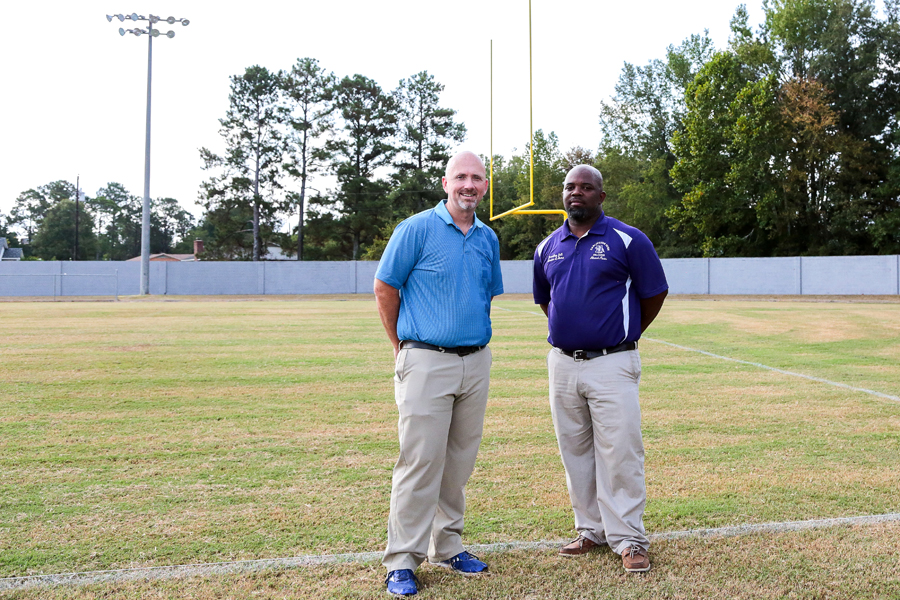 Since Darlington City Council purchased Virgil Wells Stadium and the accompanying ball field and tennis courts from the Darlington County School District in March, several improvements have been made and more are on the way.

For years after the 1995 merger of Mayo High and St. John’s High schools into Darlington High, Virgil Wells Stadium – named after the legendary Golden Bears football coach – was largely neglected and fell into disrepair. The city invested about $75,000 in 2011 to make repairs, and kicked in another $69,000 for lights in 2014.

Now with the addition of new goal posts and a scoreboard, more bleachers, a repaired and painted cinder block wall, and plans to add new gates, restrooms, and upgraded concessions, the old stadium is looking pretty great, especially under those bright lights.

The playing surface itself boasts a handsome and hardy stand of turf, which Darlington County Recreation director Lee Andrews says is better than many high school fields.

“When they did the field, Clemson University actually came in and helped with the crowning of the field and planting of the grass. Even with no rain here lately, this field is better than just about any football field around here,” Andrews said.

The stadium has a lot of history for local football fans who remember watching clashes between the Mayo Golden Bears and the SJH Blue Devils, and Darlington County Rec is counting on that history bringing fans back to Virgil Wells to support the upcoming youth football season.

“The Pee Dee Vikings (semi-pro football) team has been using this as a home field, and the neighborhood has responded well. They’ve come out to support them, and I don’t expect it to be any different when the kids play here. They’re going to have a good time,” Andrews said.

Opening day for Darlington County Recreation youth football is September 15 and games are being scheduled now.

“This year, we’ve got about 140 kids playing on nine teams. We’ll play Bishopville, Lamar, and Hartsville on Mondays, Tuesdays, Thursdays, and some Saturdays. Most of the games will start at six and seven every night, and admission is free, so please come on out and support the kids,” said Brantley Jett, athletic director for Darlington County Recreation.

Make plans now to attend the Opening Day Ceremony for the 2018 youth football season and enjoy some exciting and fun gridiron action at one of Darlington County’s most historic sports venues.

“We’re going to invite members of Virgil Wells’ family and some people who were important to the Mayo program, to observe the history, and we’re going to try to make it a big day,” Andrews said.

Virgil Wells Stadium is located at 100 Magnolia Street in Darlington. For more on Darlington County Recreation’s youth sports programs, visit them on Facebook or call 843-398-4030.