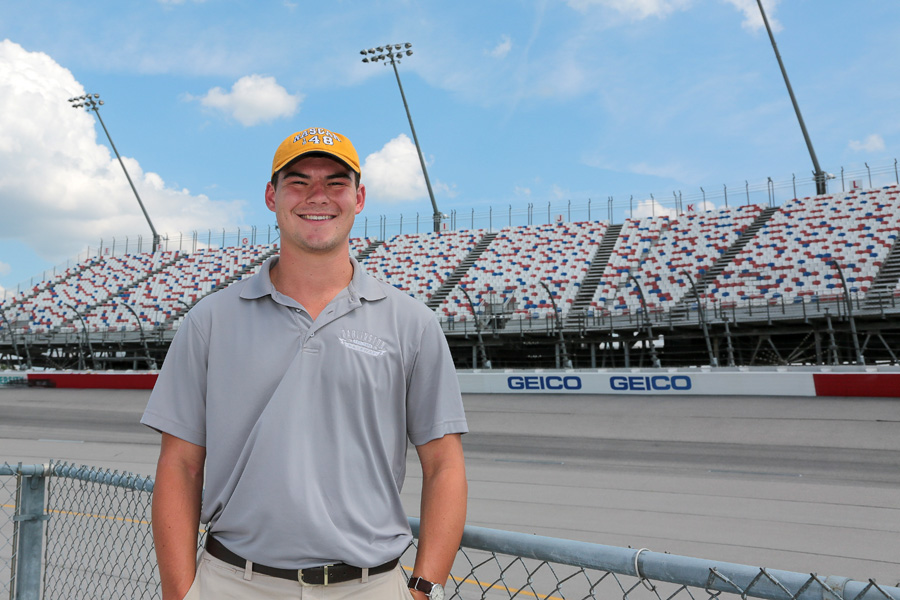 When Jim Hunter passed away in October of 2010, NASCAR lost one of its most valued and beloved executives, an advocate for the sport who helped shepherd stock car racing into its most successful era.

Jim joined NASCAR in 1983 and became the president of Darlington Raceway ten years later, where he remained until a 2001 promotion elevated him to VP of corporate communications. This summer, his grandson Hunter McKernan has joined the Darlington Raceway staff as an intern, and he’s learning the PR craft at the track where his grandfather spent many happy years.

Raised in Atlanta, Hunter spent many holidays visiting grandparents Jim and Ann Hunter at their Darlington home, which was located just five minutes away from the track. His first memory of this raceway is pretty low-key and fun: at age five, he rode his bicycle around the track, and Grandma Ann put him in her lap and let him drive a few laps. Hunter says for the longest time, he didn’t understand that Grandpa Jim was kind of a big wheel at the raceway. 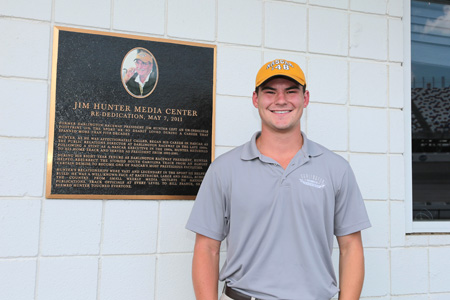 “I knew growing up that he was involved with NASCAR, but I think that I took things for granted. Getting credentials and hot passes every year, I didn’t realize how big of a deal that was,” says Hunter.

A lifelong Atlanta Falcons fan, little Hunter’s eyes opened to the popularity of NASCAR when he met Falcons running back Jerious Norwood in the pits during a race. He also noticed how busy his grandfather was during races, and just how many hats Jim had to wear to stage a successful event.

“I would see him in the pits and get to talk to him for a little bit, but he was always all business and was constantly running around,” Hunter recalls. “I think I’m coming to understand that better now that I’m meeting so many people in the racing field, many of whom he directly affected and worked with.”

A public relations student at the University of South Carolina, Hunter says he is taking some cues from his grandfather when it comes to his daily intern duties, which can include composing press releases and dealing with the media.

“I’m writing press releases now and I’m trying to do the same kinds of things he did when he was coming up in the sport,” he says, citing Jim’s history as a reporter for the Atlanta Journal-Constitution as a source of his strong, evocative writing style and his approachable, funny demeanor when dealing with journalists.

“He understood where the media came from and understood what they needed, and he knew how to present information to them in the easiest, best ways possible. He was a great promoter for the track as well, and he made the track look its best,” says Hunter. “He did a great job keying on the greatest and most unique elements of the track… he said that Darlington is like the Wrigley Field of racing.”

Hunter says his grandfather always played up Darlington Raceway’s image as “The Track Too Tough to Tame” and helped frame victory at Darlington as a source of prestige for NASCAR’s top drivers.

“Drivers do want to win here, but they also hate racing here, I think. It’s a love-hate thing where if you can win here, you love Darlington, but if you wreck on the third lap, you hate it,” Hunter says. “No turn is the same here, and that’s something I’m starting to really understand by talking to drivers – just how tough of a track this is.”

Under current president Kerry Tharp, Darlington Raceway is in the midst of a $7 million improvement project which will give fans more comfortable seating in the Tyler, Wallace, and Colvin grandstands, and a better view of the action during the Labor Day weekend races. Also, the track is installing a Wall of Honor which will feature about 2,000 feet of banners recognizing all the drivers who have taken the checkered flag at Darlington’s signature race, the Southern 500.

“The stadium seating will be a game changer for the track, and we’re also keeping the old traditions alive with the throwback weekend theme. Pairing those things will hopefully keep the track around for fifty more years,” says Hunter, expressing a sentiment that his grandfather would surely share.