The Southeastern Institute of Manufacturing and Technology (SiMT) welcomed members of the National Science Board last Thursday, Sept. 27 for a tour and a listening session where local industry representatives, educators, and students discussed the future of STEM (Science, Technology, Engineering, Mathematics) in education and employee training.

This event was co-hosted by South Carolina Advanced Technological Education (SCATE), and Florence-Darlington Technical College. The listening session at SiMT is one of four the NSB held this year across the nation.

Dr. Victor R. McCrary, NSB member and chair of the Skilled Technical Workforce Task Force, opened the listening session by discussing the importance of developing workers with technical proficiency and knowledge to fill the jobs of the future.

“We were in Detroit about three months ago, and they told us they’re going to need a million auto workers. They won’t necessarily need people with a four-year degree, but those auto workers are not going to be the same kind of workers Henry Ford had in his factories in the 1920s, where all you needed was a good alarm clock and a good back. You’ll have to have some sophisticated skills in order to work on these (new) vehicles,” said McCrary. 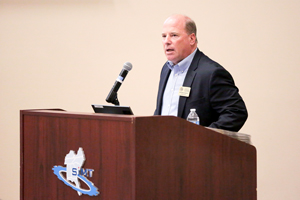 After McCrary’s opening remarks, NSB members held private table discussions with guests to learn about ways our local schools and businesses are planning to meet the growing need for STEM-capable workers.

If the event had an overarching theme, it was likely this: as science and technology play ever greater roles in global economies, the American workforce must keep pace with the trend or risk falling behind. NSB literature presents some daunting statistics that indicate our international role as leader of the science and technology pack is in peril.

“Our nation’s future competitiveness relies on building a STEM-capable U.S. workforce,” states the NSB’s Science and Engineering Indicators 2018 (a report provided at the SiMT event).

The number of jobs requiring some level of STEM expertise has grown by 34 percent over the past decade, and this includes skilled technical workers who “can install, repair, debug, and build, but do not have four-year degrees.” The report stressed a need for “on-ramps” where workers at all levels, from all backgrounds, can develop the STEM expertise they’ll need to thrive in years to come.

“Among the groups that are underutilized, yet essential to our future competitiveness, are workers who use technical skills in their jobs…and people at all education levels who have been historically underrepresented in STEM. Growing the skilled technical workforce and reducing barriers to participation in STEM will increase individual economic opportunity and support our Nation’s leadership in science and technology,” says the NSB report. 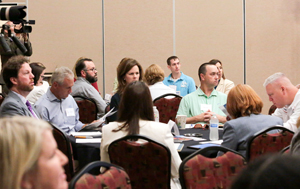 While women continue to earn about half of all science and engineering bachelor’s degrees, their participation in high-demand fields like computer science and engineering remain low. Hispanics, blacks, and American Indians or Alaska Natives comprise about 27 percent of the U.S. population over age 21, but they collectively account for only about 11 percent of the S&E workforce.

“The talents of minority groups in the U.S. are perhaps our greatest untapped resource,” says the report. It adds that without intervention to increase STEM education among minorities, these gaps will likely grow and bring about further employment challenges. Currently, about 25 percent of black workers are employed in fields where there is high risk of being replaced by automation, such as cashiers, cooks, security guards, and drivers.

“Governments and businesses should expand their investments in community and technical colleges, which continue to provide individuals with on-ramps into skilled technical careers as well as opportunities for skill renewal and development for workers at all education levels throughout their careers,” says the report.

To learn more about the National Science Board, visit nsf.gov/nsb.