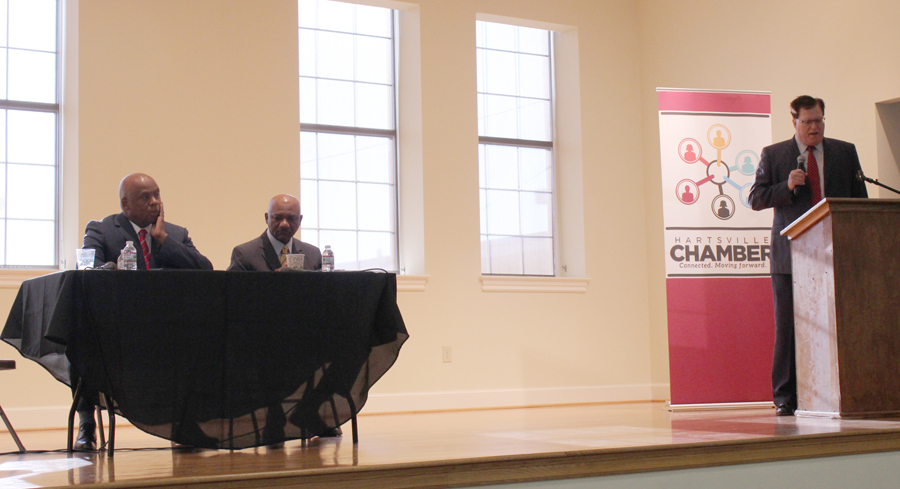 On August 31, the Hartsville Chamber of Commerce hosted an Issues Breakfast with Representative Robert Williams, Senator Gerald Malloy and Speaker of the SC House of Representatives Jay Lucas.

During the breakfast, the three members of the local delegation talked about upcoming political issues in South Carolina as well as issues that are nearing resolution.

Representative Williams spoke about several bills dealing with issues that are part of the conversation around the nation, including law enforcement misconduct and education.

“House bill 3146, is for a proposed amendment to the South Carolina constitution that the State Superintendent of Education would be appointed by the governor,” Williams said. “Based on that legislation, and upon the advise of the Senate, rather than elected by the state voters the proposed constitution amendment will be placed before the voters as a ballot question at the next general election.”

In November, current SC Secretary of Education Molly Spearman will be on the ballot for re-election. Voters will also have a referendum on the ballot, having their say on whether voters elect the Education Secretary after this election.

Williams said that both the House and the Senate have taken up the issue.

“Senate Bill 27 was also approved to establish qualifications for the office of the State Superintendent relating to the educational attainment and professional experience and to make provision for the position to be appointed such as voters approve by the constitutional amendment,” he said.

One Senate bill was devised to help protect elderly and at-risk people from being scammed.

“This bill deals with criminal and civil penalties for defrauding the elderly and the most vulnerable adults,” Williams said. “This will target those who solicit or obtain by deception, intimidation or undue influence the money or property of a vulnerable adult or their personal information for the purpose of committing identity fraud.”

Williams said that many people locally have been at-risk of falling victim to identity and monetary theft.

“Many folks in this area, certainly in Darlington, have been receiving erroneous calls, calls from predators,” Williams said. “My neighbor, someone called him and said they were from the IRS and evidently they were getting ready to go to the bank, take out $5,000 and pay someone from that 800-number. There are folks out there who are continually trying to defraud and take advantage of elderly and those who are vulnerable in our community. We are trying to put a stop to that.”

The final bill Williams talked about the handling misconduct and law enforcement.

“House Bill 4479 revises the process of dealing with law enforcement misconduct and allegations,” Williams said. “Under this legislation, no person who has a pending allegation of misconduct may be employee as a law enforcement officer or a telecommunications operator at any other facility. So if an officer has some issues with his conduct, he can’t go to another police department, sheriff’s department or SLED; they can’t do that. They are going to have to clear all of these charges before they can be hired at other facilities.”