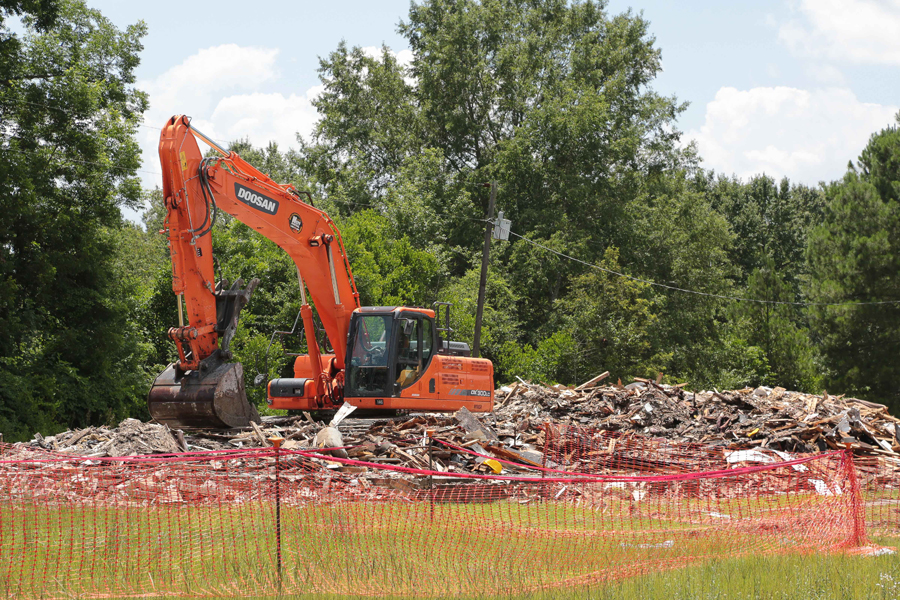 Demolition of the abandoned Lincoln Village in Hartsville has begun and should be finished in five weeks.
Photo by Samantha lyles

For 17 years, the abandoned Lincoln Village Apartments complex has been a blight on the 8th Street neighborhood of Hartsville, but by the end of this summer, those dilapidated buildings will be gone, leaving only a grassy green expanse ready for new construction.

Abandoned since 2000, the Lincoln Village complex has long been on Hartsville City Council’s radar as a nuisance property, as it drew drug and criminal activity to the neighborhood. The buildings were also a health hazard as they contain significant amounts of asbestos – a known carcinogen.

Over the years, a number of different real estate developers acquired the property and announced plans for rehabilitation, but those plans never came to fruition. The City of Hartsville acquired the property in April 2015 and set about finding ways to fund demolition and removal of all structures, as well as efforts to revitalize the surrounding neighborhood.

“(Lincoln Village) was identified as a priority project by the Community Planning Assistance Team’s neighborhood revitalization plan, so we brought in a group of experts from the American Planning Association and they made a comprehensive revitalization strategy for us,” says Mary Catherine Farrell, assistant to the Hartsville City Manager. “They spent a lot of time talking to stakeholders, talking to residents, hearing their concerns and being really present and immersed in the neighborhood in order to identify needs and come up with a game plan for moving forward.”

The city applied for and received SC Department of Commerce Community Development Block Grant funding of $500,000 to help pay for site remediation, which will include grading and greening. An asbestos study was conducted on the property and the demo site is being monitored to ensure there is no danger to the surrounding community.

The City of Hartsville will contribute about $150,000 to the project, and that funding will help pay for other neighborhood upgrades like improved street lighting, security cameras, and cleaning of an adjacent abandoned cemetery.

At their April 11 regular meeting, Hartsville City Council awarding the contract for hazardous materials abatement (including asbestos and lead paint) and demolition to Trifecta Services Company of Charlotte, North Carolina. This company submitted the low bid of $547,300.

An onsite crewmember from Trifecta estimated clearing and greening of the 7-acre Lincoln Village site would be complete within five weeks, weather permitting.