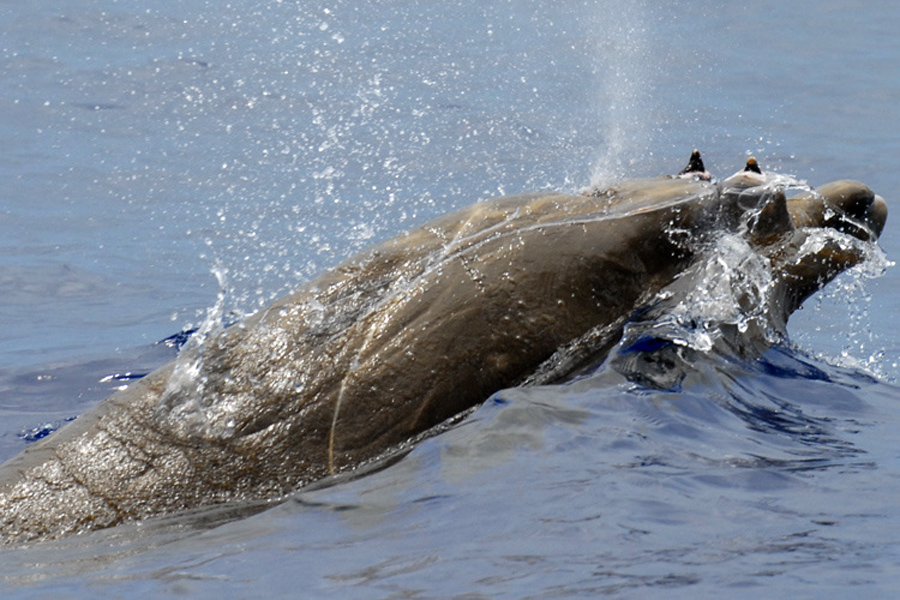 Blainville’s beaked whales perform short dive sequences at 15 to 20 second intervals, followed by long dives of up to 54 minutes duration. On surfacing, the beak points skyward. After taking a breath, the beak is sometimes slapped on the surface and the animal may roll slightly before disappearing. Their population numbers are unknown. (Info from us.whales.org)

When she returned to the classroom this fall, Lamar High School math teacher Michelle Greene had a truly unique “How I Spent My Summer Vacation” story to share with students and colleagues. Greene recently spent 18 days at sea, studying whales as part of the NOAA (National Oceanic and Atmospheric Administration) Teacher at Sea program.

While sorting through professional development opportunities for her summer break, Greene lit on NOAA’s programs and mistakenly thought they would focus on weather, but they offered something a little further afield than storm chasing. Her program took her aboard the NOAA ship Gordon Gunter where she joined a crew of 20 NOAA Corp members and 15 scientists from Massachusetts, California, and England on a quest to study cetaceans (whales, porpoises, and dolphins) in the northern Atlantic Ocean.

Though Greene fears the open water, she summoned her courage, boarded the boat, and set sail from a Naval base in Newport, Rhode Island. Despite some rough seas, Greene’s constitution proved stronger that she expected, and she did not get seasick.
“Anybody who knows me knows I am deathly afraid of the water, yet I went out hundreds of miles into the ocean because I wanted my students to see me overcoming my fears,” says Greene. “It was a great opportunity for me to get involved and show my students that while I might not be a science teacher, I can go out and do things outside of my comfort zone.”

Greene’s background in mathematics and applied statistics did not prepare her for the incalculable joy she would feel upon seeing some of Earth’s most majestic creatures in their element. 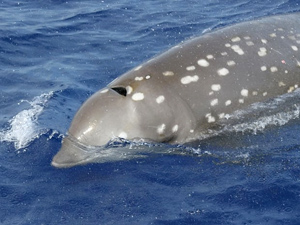 Cuvier’s beaked whale is a deep diver, regularly diving to depths of 2,000 meters or more where they hunt and feed on squid, some fish and crustaceans. Group sizes are small (perhaps 2-7 animals), but lone animals are often seen. Little is known about the animal’s social habits. Cuvier’s do not ride bow waves like dolphins or other whales, but will occasionally breach. Their worldwide population is estimated to be 100,000. (Info from us.whales.org)

“This was amazing. I am talking pure-t amazing! I got to see sperm whales, finned whales, pilot whales, multiple species of dolphins,” Greene says, adding that she also got to see the elusive beaked whales the scientists set out to study.

“(Beaked whales) have long beaks on their rostrum – their heads – and they only have two teeth. If you looked through binoculars from the ship, you could tell from where those teeth are set what kind of whale it was,” says Greene.

Among other things, the cetacean study aimed to gauge the population density of beaked whales in the North Atlantic area, and Greene says these particular whales can be hard to find. These beaked whales are deep divers who live far off the New England coast and hunt for squid near the ocean floor. When they’re foraging, they can stay underwater for over fifty minutes without returning to the surface for breath. In order to increase the chances of encountering these animals, the Gordon Gunter sailed out to the Continental Shelf Break, where canyons run 2,500 meters deep.

While working with the visual sighting team, Greene struggled at first to tell the difference between a whitecap, a swell, and an actual whale breaching the surface. Her technique improved after one scientist advised her to scan the surface for things that were “out of the ordinary.” 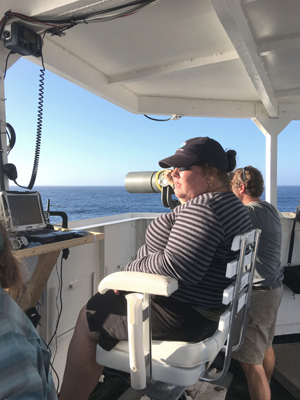 “One day near the end of the trip, we were sitting on the fly bridge and I saw a flash… it was like, ooh! I saw it! Did I see it? Was that a whale?” Greene asked for confirmation and kept looking, and the flash of motion recurred. “It was a whale; in fact, it was the whale we were looking for.”

As it turned out, this beaked whale was an impressive and charming fellow who traveled with five female companions. Since Greene spied the lucky chap, she got to name him.

“Right away, I called them Elvis and his entourage, because he was this guy with all the girls just following him around everywhere,” she recalls, laughing.

They tracked Elvis and his ladyfriends for a bit and gathered some valuable data. When they finally lost track of him, Greene quipped, “Elvis has left the building.” Though the scientists told Greene they never named cetacean study subjects, her quirky appellation stuck. She later heard that on the second leg of their cruise, the scientists ended up slapping the moniker “Trident” on another whale.

To listen to the whales, the acoustics team used high-tech hydrophones capable of picking up sounds well above the human hearing range. Greene says she was surprised by these otherworldly sounds.

“I never realized that whales make all these different noises. All I remembered growing up was the chirping sounds that dolphins like Flipper made on TV shows. Whales make these clicking sounds… and they use them like flashlights, sending out sounds while they’re looking for food,” she says.

The scientists also succeeded in applying a tracking tag on a species of whale that had never been tagged before, which gave them ten hours of valuable data about its movements and dives. They scooped up samples of water around the sighted animals, hoping to recover shed DNA that could be rife with biological information. Greene says she got a tad squeamish when the researchers used a crossbow bolt with tiny one-inch tissue sampler on the end to gather skin samples from the larger whales.
“I asked if shooting them like that would hurt them, and they said that since the whales were about five and a half meters long, it would feel about like pricking your finger,” she recalls.

The Gordon Gunter also dropped off an anchored recording device to eavesdrop on whales and see what they sound like with no ships in the area.

“As a statistics teacher, it was amazing to me because we were gathering all of this data. Data, data, data. And they can use this to figure out the population density in the North Atlantic, and be able to tell what the whales do during the day,” says Greene.

Greene returned home with a batch of entertaining stories for her students, and a new appreciation for adventure that she shared with her fellow teachers. She’s already planning her next professional development outing (to the Arctic!) and has convinced a few colleagues to apply to the Teacher at Sea program next year.