‘I’ll still be up here all the time’ 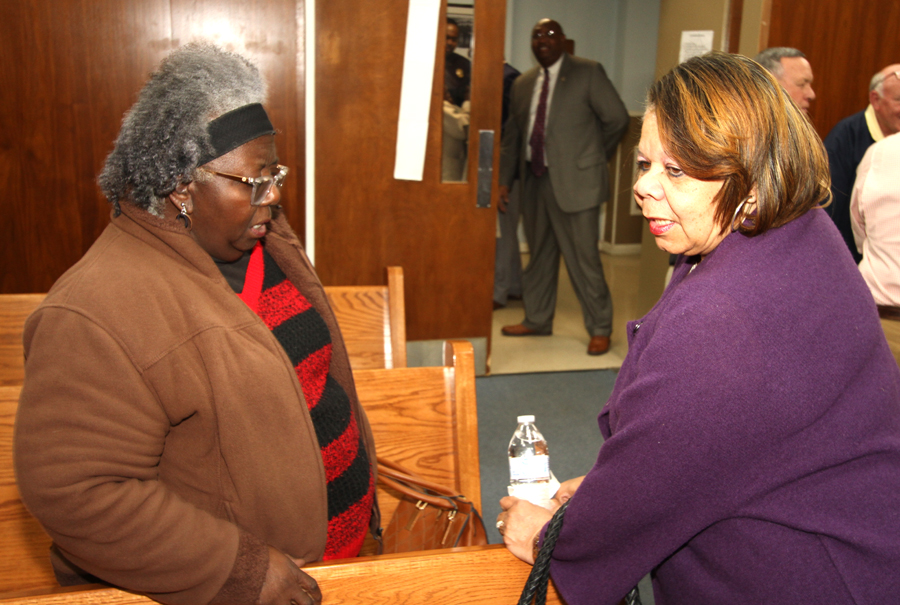 Hines chats with a supporter as she leaves the council chamber. Photos by Bobby Bryant

“I’ll still be up here all the time,” Hines said during her final council meeting Dec. 3 – a quick, 40-minute session with a routine agenda. “You know what? It’s in my blood.” 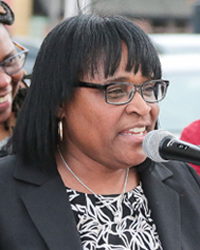 U.S. Sen. Tim Scott, R-S.C., sent a message congratulating Hines and Bruce for their service on council, and council members also thanked them for serving. Hines was a longtime council member before being elected mayor in 2015, and Bruce has been on council four years.

“At Christmastime, I can’t forget about the lights,” Hines told council last week. “When I got on council, I went to a beautification meeting and we talked about the lights. They knew at that time that I loved lights. … As each year progressed, we added on the lights and we dressed up Darlington around the Square and all the way out to Wal-Mart.

“ … Darlington is looking great, because I love the lights,” she said. 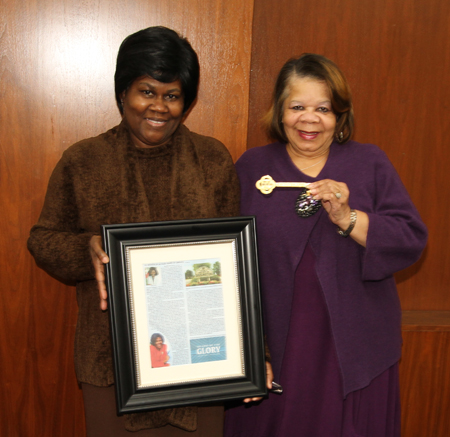 Mayor Gloria Hines awards a key to the city to city clerk/treasurer Gloria Pridgen for 40 years of service.

Hines read from a prepared text during the meeting, highlighting what she described as “some wonderful and great things” that have happened “under my leadership.” Among them, Hines said, were $2.5 million in grant money for Darlington’s stormwater fund; completing the first phase of the stormwater project; more than $800,000 in grants for sewer-line work at the U.S. 52 Bypass; Community Development Block Grant improvements for housing; the opening of Wal-Mart in 2016; the city’s purchase of a “Vactor Truck” for cleaning clogged storm drains; hiring Kelvin Washington as the city’s new police chief (now public safety director); installing new sidewalk on South Main Street.

“Thank you, and may God bless the citizens of Darlington,” Hines said. “God sits high and looks low, and can see very well what’s happening down here.”

Also during the session, Hines awarded keys to the city to Darlington Police Department Lt. Steve Buffkin for 42 years of service and to city clerk/treasurer Gloria Pridgen for 40 years of service. 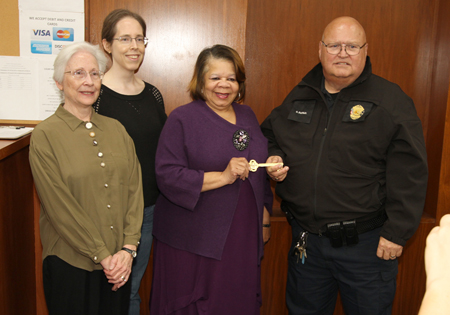 Hines awards a key to the city to Darlington Police Department Lt. Steve Buffkin for 42 years of service.

Also during the brief meeting last week, Mayor-elect Boyd told council about what appears to be a way to put a playground at a softball field the city owns on Old Florence Highway.

Council member Sheila Baccus earlier had expressed interest in turning the site into a playground. Recreation Director Lee Andrews looked around and found a chance for the city to buy $41,000 worth of playground equipment that was on sale for half the original price. Council was interested in making the deal, but there was debate over whether the city could use hospitality-tax funds for the purchase. Meanwhile, time was running out for the half-price deal on the playground equipment.

Boyd said that issue came up while he and Andrews were meeting with Pee Dee Electric CEO Mike Fuller to talk about a possible sports complex. Boyd said Fuller offered the city a low-interest loan to buy the playground equipment. Boyd said he passed on the offer to the city attorney and city manager, and it will be presented to council for approval in January.