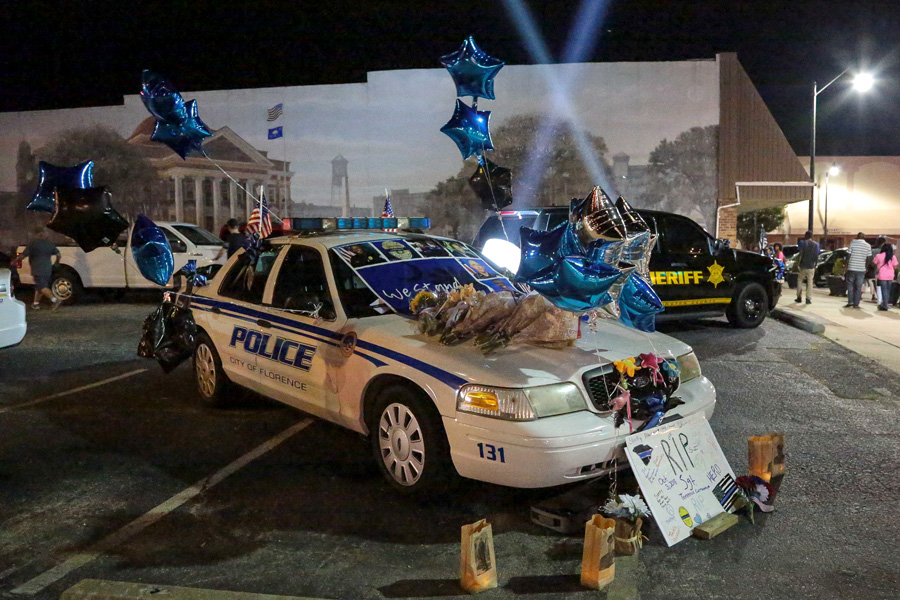 His name was Sgt. Terrence Carraway, he was a 30-year veteran Florence police officer who lived in Darlington, and he is being mourned around the state and nation as the officer who didn’t survive a shooting rampage that wounded six of his colleagues last week.

Carraway, 52, was killed Oct. 3 when a man at the Vintage Place subdivision in Florence County opened fire on sheriff’s officers who had come to serve a warrant. When other officers came to help, they were also caught in the gunfire.

“Fire was being shot all over,” Florence County Sheriff Kenney Boone said. “The way the suspect was positioned, his (field) of fire was several hundred yards. He had an advantage. Officers couldn’t get to the ones that were down.”

Seven officers, including the Florence Police Department’s Carraway, were shot. Three Florence city officers and three Florence County deputies were wounded. Carraway was the only fatality. A 74-year-old disabled Vietnam veteran, Frederick Hopkins, was being held in the shootings; his Facebook page describes him as a competitive shooter since 1984.

Florence Police Chief Allen Heidler called Carraway “the bravest police officer I have ever known.” He added: “Today will mark a very horrific day for the Florence Police Department. Today we lost a good friend of mine, an officer I’ve known for 30 years.”

Condolences quickly poured in from around the nation and state. “My thoughts and prayers are with the Florence County Sheriff’s Office and the Florence Police Department tonight,” President Donald Trump said via Twitter.

Carraway was married and has a son in his 20s, according to a friend, Curtis Boyd, owner of Fitness World in Darlington, where Carraway worked out. He described Carraway as a “super-cop” who was “always smiling, always with the same attitude.” Carraway coached youth football, he said.

Boyd said the Florence shootings made no sense. “Some crazy person decides to shoot your friend for no reason.”

On Thursday night, hundreds of people attended a candlelight vigil for Carraway and the wounded officers at First Baptist Church in Florence.

Carraway was being remembered as a fan of the Oakland Raiders football team and as a motorcycle enthusiast. A photo of him wearing a “Jurassic Park” T-shirt quickly circulated around the world on the Internet.

He was an Air Force veteran of the 315th Airlift Wing at Charleston Air Force Base and had retired from the Air Force as a technical sergeant. Carraway’s Facebook page says he attended Mayo High School.

In a 2015 exchange on Facebook, Carraway and a friend joked about getting older.

“What’s up, old man? I see you just had a birthday,” his friend wrote.

The friend replied, “We’ve earned it.”

Funeral arrangements for Carraway had not been announced.

A GoFundMe account to aid Carraway’s family members has been set up by Serve and Connect, the S.C. Law Enforcement Officers Association, the S.C. Police Chiefs Association and the S.C. Law Enforcement Assistance program. A separate GoFundMe account will benefit the officers wounded in the Florence shootings. The Terrence Carraway Memorial Fund can be found here.

The wounded officers have been identified in media reports as Brian Hart, Travis Scott and Scott Williamson of the Florence Police Department and Arie Davis, Sarah Miller and Farrah Turner of the Florence County Sheriff’s Office.