A Story About Change

When I first heard that aristocratic four-word name, “John de la Howe,” I sensed something monumental, a nobleman, perhaps. Later, I heard of the John de la Howe School, not just John de la Howe as locals referred to it. A school for orphans it was, and members of my Georgia church collected Christmas gifts for them. I was glad my church was helping children without homes. John de la Howe was, indeed, noble. 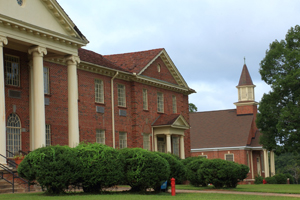 Then I grew up, and the winds of fate blew me deep into the blazing Midlands of South Carolina. Later, another wind blew me into the world of books, magazines, and newspapers, and I underwent a metamorphosis. A desire to better know this region consumed me and I can tell you the one thing that is as true as the sky is blue. Things change.

The first time I stood by John de la Howe’s walled, roofless grave, a tree grew up through it. The roof collapsed I thought. Later, I learned his will decreed it have no roof. The second time I stood by his grave, I sensed why it had no roof. Any seed that might drift in stood a chance of growing. The man believed in giving things a chance to grow, and among those things were the homeless seeds of humanity—orphans. He envisioned an agricultural education for them, and on the heavy iron door to his sepulcher you’ll see the embossed words “Agriculturalis Seminar.” He saw it through.

Well, what we know about the man is this. Dr. John de la Howe immigrated to Charleston in 1760 and began a medical practice. He bought land in the Abbeville District, part of which is now McCormick County, and established a farm and home in the wilderness. His will decreed that his estate become an agricultural seminary, a home where orphans could acquire a pragmatic education and skills useful over a lifetime. The years rolled by, decades rolled by, and the John de la Howe School educated thousands of children. And it did something else. It gave young people whose families could not or would not care for them a home. (Hear them tell their story, and you may need a tissue.) They grew up and met success in agriculture, the military, business, education, and fields beyond the green acres of farmland. Mission accomplished. 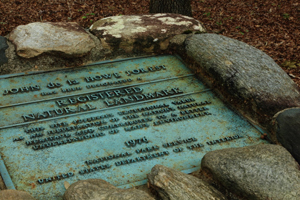 Blissfully ignorant I was. Growing up on the border, I traveled South Carolina’s graveled roads as a young man and all I remember is piney woods isolation and cold beers from a juke joint, which burned. For two summers in the late 1960s I worked at Georgia’s Elijah Clark State Park, which sits on Clarks Hill Lake across from South Carolina. I was one of the garbage men. We went from campsite to campsite on a Massey Ferguson tractor pulling a wooden trailer. We’d empty trashcans into the trailer and dump it in a trench in backwoods and set it afire. Now and then, for lunch, we garbage men would leave dry Lincoln County for icy red cans of Carling Black Label we could legally buy in Bordeaux. With beers and chilidogs in a greasy paper sack, we’d head toward Georgia and eat our lunch on the South Carolina side at a picnic spot no longer there. We’d sit and eat and sip, oblivious to the deep history that surrounded us.

The eyes of the man see things differently. Today, historical markers hold more interest than beer signs. And on Gettys Road you’ll see a marker, “John de la Howe School,” the oldest state institution in South Carolina and the second oldest in the Carolinas. Those in the know recognize it as America’s oldest manual training foundation. Hold onto that thought as I tell you what surrounds this school’s 1,310 acres. Indians, pioneers, and French Huguenots walked this land.

Not that far as the crow flies, on February 1, 1760, 100 Cherokee warriors killed twenty-three settlers, the Long Cane Massacre, tragic outcome of a boundary dispute. From here, a few backroad twists and turns will spirit you to Badwell Cemetery, the resting place of the French Huguenot Petigru family. You’ll not forget the inscription on a four-sided white marble marker of a woman who died at 25. “Her sun went down while it was yet day,” Jeremiah 15:9.

Drive to nearby Mount Carmel and step into desolation. In the late 1880s it was a bustling railroad town but time would forget Mount Carmel. The Great Depression, the boll weevil’s devastation of cotton, a fire, and a thing called the automobile did in Mount Carmel. I love Mount Carmel and its boarded up, beautiful churches and homes, for here, fate bequeaths us remnants of bygone glory days.

You can’t see the nearby site of Fort Charlotte. It’s 50 feet beneath Clarks Hill Lake. There, colonial South Carolinians seized the fort marking South Carolina’s entry into the Revolutionary War.

Another country road or two will lead you to the French Huguenot memorial. Hang a left onto a lengthy dirt road. Deeper into pines you go and then you see it, a granite Maltese cross that marks the New Bordeaux Huguenot place of worship. New Bordeaux, 1764, was the last of seven French Huguenot colonies founded in South Carolina. They planted fruit trees, olive gardens, and vineyards. The village prospered in the 1760s and early 1770s, but the Revolutionary War ruined things and New Bordeaux faded.

Drive down a long, long dirt road and you’ll come to the Noble family cemetery. Within this brick-walled cemetery sleeps former governor, Patrick Noble. He graduated from nearby Willington Academy, an early 1800s prestigious prep school for boys, whose founder, Moses Waddel, became the first president of what would become University of Georgia. Waddel would call boys to class with blasts from his hunting horn.

Horn aside, we see that innovative education is a heritage in the region where John de la Howe sits, and it sits off to itself. Magnificent isolation? That’s one of John de la Howe’s strengths. Nary a stoplight nor congested highway. Imagine that. No screaming sirens, no tacky fast food joints, no urban sprawl, no light pollution. Here you can set your camera just so in predawn hours and photograph the Milky Way, that neon purple-red, milky white, star-salted river of interstellar light arcing over de la Howe’s fields and forests.

Bathed in Monday morning light, I walked the school’s dew-covered grounds. In front of the Administration building a millstone rests in grass with a large block of stone upon it. A sundial once upon a time, these remnants of the past? Gristmills? Largely gone are those blends of farming and technology but they remind us of something important. Change, which goes by other names … adjustment, adaptation, and transformation, grinds away the past while reshaping the future.

In the 1990s, the school’s focus changed to helping students with behavioral problems, but such problems existed statewide, and enrollment declined as school districts developed alternative program for students in need. Leadership lost its luster as well. The specter of an uncertain future reared its head and lawmakers grew edgy about allotting state tax dollars to the school.

The sun always rises though. A 2017 feasibility study for the Legislature determined that de la Howe could become a school for agriculture. What a timely turn of events. I write features for South Carolina Farmer magazine, and farming, today, resides in the realm of high-tech science. A few examples … Down near Cameron, a drone’s high perspective gives farmers a detection technology. “You can pick out where an old homestead once sat,” says Drake Perrow. He’s referring to a square patch where an old tin roof met its demise. There, peanuts failed to prosper. Tin was often painted with a primer of 80 percent zinc to minimize rusting and the zinc leached into the soil, inhibiting the peanuts’ growth.

In Dillon County, Cullen Bryant operates Bryant Farms. “You’re riding along in your field early in the growing season. You turn on your tractor’s GPS monitor, which pinpoints your exact location to within one meter. Another button displays a series of Geographical Information System maps that show where the soil in your field is moist and where soil factors limit crop growth. You upload remote sensing data, collected yesterday, that shows where your new crop is thriving and where it isn’t. An onboard machine automatically applies fertilizer and pesticides—the right amount exactly where they’re needed. You sit back and enjoy the ride, saving money as the machines do most of the work.”

Few know much about this school. It has stone buildings any university would covet, nature trails, wilderness camps, cottages, meeting venues, a barn converted to a concert hall, and all those woods and fields. Think of it as a laboratory for pre-college agricultural education that’s sorely needed. Technology changes so fast, it just makes sense to give high school students a jump-start. True to John de la Howe’s vision, the school’s new mission ironically was its original mission: educate children in agriculture and mechanic arts, i.e. farming and technology.

New leadership is in place and work will be done. Agriculture is South Carolina’s largest industry, and it makes sense to upgrade campus buildings to meet future students’ technological needs. Renovations will turn brick cottages into modern living-learning environments. A comprehensive curriculum will prepare students for college and careers. Students will gain expertise in agriculture, develop life skills, and discover how molecular biology, technology, robotics, and drones are changing today’s farms. All accomplished while wisely spending funds to attract the best teachers and students in a sheltered setting soaked in history.

John de la Howe sits deep in the heart of the Sumter National Forest and on the National Register of Historic Places. Its old-growth forest is a National Parks Service national natural landmark, and over 160 acres surrounding Dr. John de la Howe’s tomb are forever protected. Stand by that roofless mausoleum and listen. All you’ll hear are wind, birds, and cicadas. I believe the old doctor would welcome the sound of a drone high above. A welcome sign of change it’d be for a pragmatic mission he envisioned way back in 1797—feeding mankind and turning children into responsible, accomplished members of society.

Visit my website at www.tompoland.net
Email me at tompol@earthlink.net
Tom Poland is the author of twelve books and more than 1,000 magazine features. A Southern writer, his work has appeared in magazines throughout the South. The University of South Carolina Press released his book, Georgialina, A Southland As We Knew It, in November 2015 and his and Robert Clark’s Reflections Of South Carolina, Vol. II in 2014. The History Press of Charleston published Classic Carolina Road Trips From Columbia in 2014. He writes a weekly column for newspapers in Georgia and South Carolina about the South, its people, traditions, lifestyle, and changing culture and speaks often to groups across South Carolina and Georgia, “Georgialina.”