Home » News » Dakota Hunter: Get Thrown Into The Fire And Just Start Doing It

Dakota Hunter: Get Thrown Into The Fire And Just Start Doing It 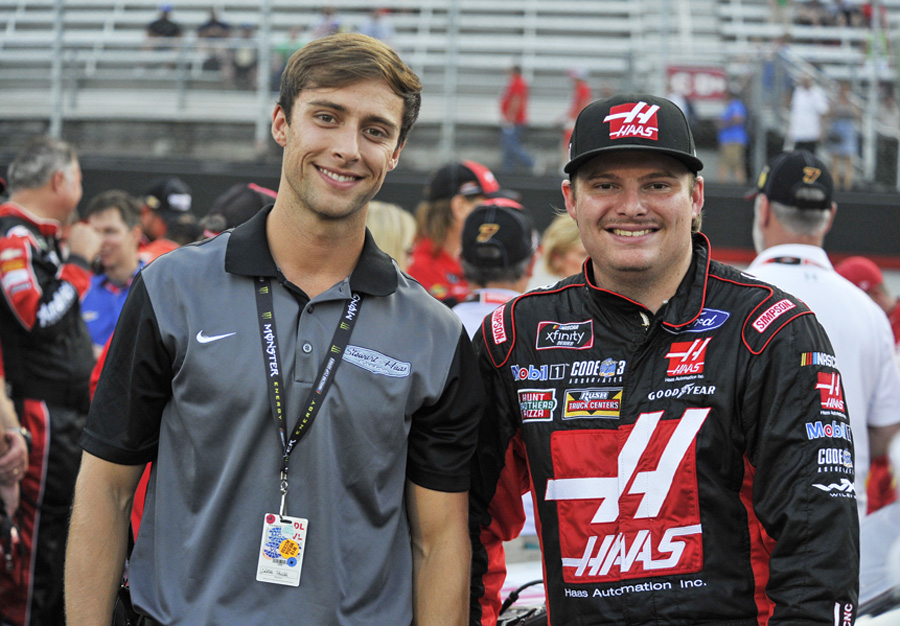 NASCAR racing isn’t just something Dakota Hunter is passionate about. It’s in his blood.

Hunter is the grandson of former Darlington Raceway President, the late Jim Hunter, and he has been visiting NASCAR races since he was a little kid. Whether it was causing childhood mischief in the driver’s lot or sitting on the lap of some of the sport’s Hall of Famers, Hunter has always called the life in the fast lane home.

“Growing up, I didn’t have a babysitter, so I was at pretty much all of the races that I didn’t have my mom or my dad home that week or weekend,” Hunter said. “It’s really funny. Actually, looking back, I was at Watkins Glen earlier this year, and I’m watching these young kids on their skateboards, and I was telling Kevin Harvick’s coach driver Lynn – I was telling him how funny it is looking back and watching these young guys rolling around, and that was me, literally in the driver’s lot.”

Hunter’s father, Scott who is a veteran media member of the sport, taught him early on about the passion and skillsets that are needed to succeed in the NASCAR industry. As Dakota matured, he was more involved in the sport. He helped his father catalogue photos, and Dakota even helped him capture photos during race weekends.

“I think my first official job, where I got paid something, was my dad brought me into the NASCAR building, and he was going to give me about $10 an hour to scan old photos,” Hunter said. “He had like 20 boxes of old photos that he took back in the day. They were old, old photos, and they needed to be scanned digitally.”

These days, however, Hunter helps manage some of the industry’s biggest stars on and off the track while working for True Speed Communication, a public relations and marketing firm. While Hunter has worked with Kyle Busch, and Stewart-Haas Racing’s Kevin Harvick, Kurt Busch, Clint Bowyer, Aric Almirola, Danica Patrick and Cole Custer, he had to pay his dues just like everyone else in the sport.

Hunter is a graduate of UNC Charlotte, where he studied communications and public relations, while minoring in journalism. College gave him the foundation, but it was being thrown into the fire and learning from real-world experiences that has set Hunter apart from others in the industry. Hunter’s first break in the sport came when he earned an internship with Charlotte Motor Speedway while he was still in college. While working for the racetrack, Dakota assisted with all aspects of marketing, public relations and social media. Speedway Motorsports, Inc. (SMI), which owns Charlotte Motor Speedway, has its sister tracks work closely together, so Hunter helped out during the Monster Energy NASCAR Cup Series race weekends at Atlanta Motor Speedway and Bristol Motor Speedway as well.

Following the conclusion of his internship at Charlotte Motor Speedway, Hunter had to find other opportunities in the sport. Luckily for Hunter, his past experience and exposure placed him in the sight of the industry’s best, so finding other opportunities came a little easier once his foot was already in the door. Darlington Raceway President Kerry Tharp recruited Hunter during his senior year in college to assist with the track’s marketing and ticket sales efforts during the Bojangles’ Southern 500 weekend.

“I ran out of internship opportunities,” Hunter said. “When I heard Kerry Tharp became the president of Darlington Raceway I called him a week later and asked if he needed any free work. I filled in the cracks at the racetrack, and I did PR (public relations) and marketing and ticket sales all in one week just to learn. That was probably one of the biggest opportunities for me.”

Senior Vice President of True Speed Marketing, Mike Arning was at Darlington Raceway that weekend, and he had seen Hunter on several occasions throughout the season. A few months later, Arning gave Hunter a call and hired him to represent Haas F1 in Formula 1 as an intern and, two months later, hired him full-time while still in college to represent Stewart-Haas Racing in the NASCAR national series.

“Mike Arning with True Speed saw me a couple times at a couple of racetracks and finally gave me a call and asked if I wanted to help out with some Haas F1 social media before I graduated,” Hunter said. “I helped out a little bit with that, and that turned into PR rep. for Cole Custer and filling in for all of our Cup drivers doing social media, flying drones and you name it.”

The opportunity to work with True Speed Communication is without a doubt exciting for Hunter, but in the very beginning, he was naturally just a little nervous. After all, he was working with some of the sport’s most talented individuals. However, he quickly adapted and the work became routine, especially after Hunter formed better relationships with the drivers he represented.

“I guess when I first started, you get nervous, you know, like ‘wow, I’m just a young guy that’s getting thrown into the fire’, Hunter said. “But quite honestly, I wouldn’t want to do it any other way than to get thrown into the fire and just start doing it. Now that I know the drivers better, and I’ve out a lot of time and effort into learning how to improve each and every week. I still have a ton to learn and I continue to learn every week. I’m surrounded by a great group at True Speed, and it’s a lot of fun really to be a part of it.”