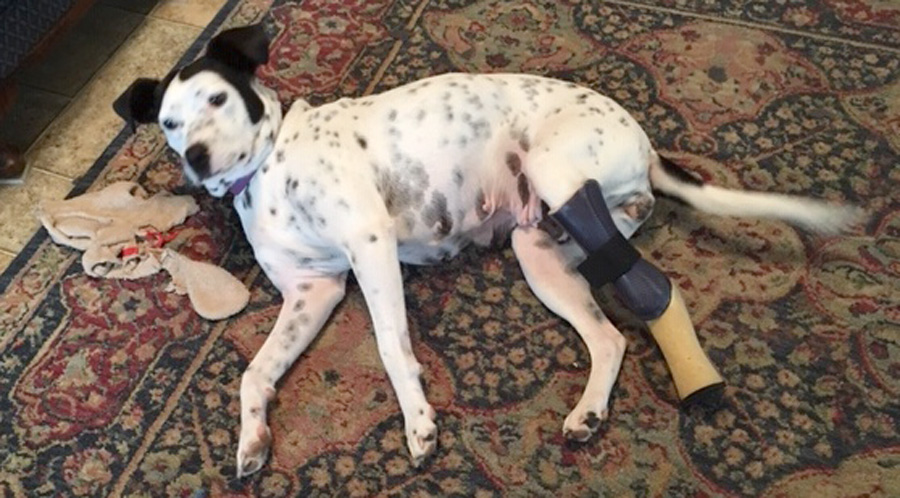 Lola the dog was in trouble, but she got a hand – and a foot – in Darlington.

Palmetto Prosthetics and Orthotics’ John Moyd with Lola and her prosthesis. Contributed photo

Carolyn Powers of Darlington says the stray dog arrived at the Darlington County Humane Society’s animal shelter in August. She was “very thin, heartworm-positive, very pregnant, missing bottom teeth, a large sore on her nose, an indented ring around her neck (from rope or chain) and missing her back left foot.”

After giving birth to six healthy pups, the dog took a trip to Palmetto Prosthetics and Orthotics in Florence, where the company’s John Moyd “undertook the task of making a prosthesis for Lola’s missing foot,” Powers said.

“He thought that her foot had either been caught in a trap and she chewed it off to get free or she was used as a bait dog,” Powers said. “He evaluated her and agreed to make the prosthesis for free! We were ecstatic because prosthetics are very expensive.”

“Lola and I made a few trips for fittings until he thought it was right. … She is not putting full weight on it but continues to put the leg down more and more as time goes on. …

“Lola is the sweetest, most loving dog in the whole world. She has endured so much in her young life but she is able to give back even more in return — love and companionship.”

This past weekend, Powers said, Lola was to leave for Vermont, where she will be placed in a foster home until she is adopted out. “We all love Lola and hope she gets the best ‘forever’ home in the whole world,” Powers said.