Home » News » Ann Hunter: Jim would be so proud that Darlington is continuing the tradition

Ann Hunter: Jim would be so proud that Darlington is continuing the tradition 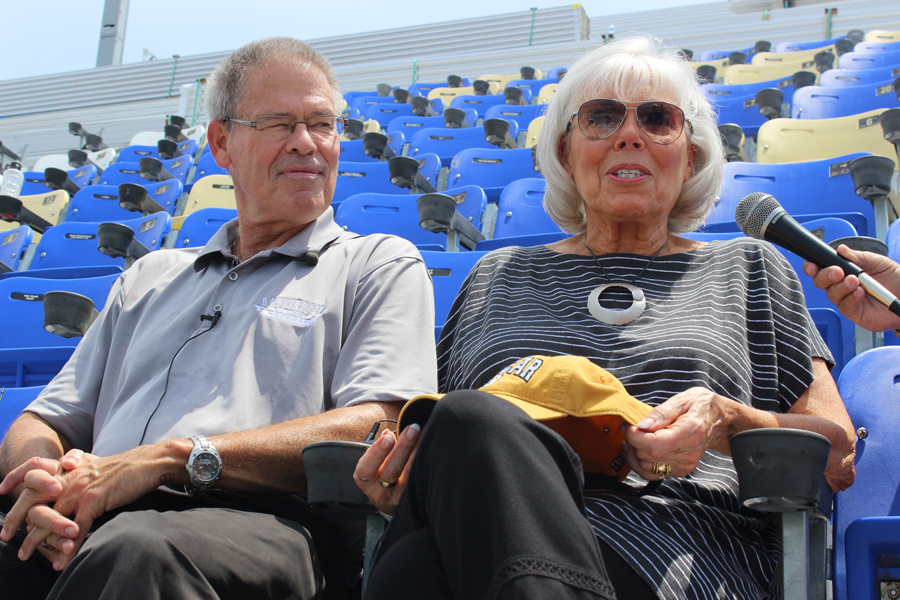 Ann Hunter talks about the renovations at Darlington Raceway during a tour with Track President Kerry Tharp. Photos by Melissa Rollins

At the end of June, Darlington Raceway Track President Kerry Tharp walked members of the media around the track to see the improvements being made in the $7 million dollar ‘Better Darlington’ campaign. Joining Tharp was Ann Hunter, widow of the late Darlington Raceway track president Jim Hunter.

“It gives me great honor and privilege to be out here, to be the President at Darlington, to walk in the same places as a man who I respected very much, Jim Hunter,” Tharp said. “He was my mentor when I worked at NASCAR and it is a real thrill to have his wife Ann join us today. Jim was the track president here when Tyler Towers were built back in 1994. I thought it would be appropriate to have her out here today. I can imagine right now that Hunter is looking down on us now saying ‘What in the heck took you all so long to do this?’ but we are proud of this project.”

Ann echoed Tharp’s statement, saying that her late husband would be excited about everything happening at the track.

“Jim would be so proud and so excited about these improvements and that Darlington is continuing that tradition,” Hunter said. “There is such a history here and he wanted it to go back to the Labor Day race, and it has. He would be so happy that Kerry is here and that Kerry is living in Darlington, thinking about the community as Jim did. ”

Hunter said that even though a lot has changed in the sport, Darlington has remained the iconic Track Too Tough To Tame.

Another thing that has remained the same at Darlington, and other areas of NASCAR, is the representation of the Hunter family: for the summer of 2018, grandson Hunter McKernan served as an intern for the track.
“Hunter is at the track working as an intern and he will be a senior at Carolina this year,” Ann Hunter said. “Jim would be so proud because he is in the School of Journalism in sports marketing following in his granddaddy’s footsteps. Jim always said he was an awesome writer even when he was a little boy so he’s following in that. Our other grandson Dakota works in racing, too.”

Tharp said that having Hunter serve as an intern has been great and continues the work that he and others are doing to generate more interest from younger generations.

“There is no question (that having youth in the sport brings in more youth to the sport); we want to get young people involved,” Tharp said. “When you have young people getting involved at an early age, they carry that down year after year. So many people came to the racetrack with their granddad or their uncle. Having grown up in a NASCAR-based family Hunter, and really everyone in this community, knows that Darlington is an iconic racetrack. We have to get the young people to realize that and we’re making some progress.”