Home » Lifestyles » A New Tradition: A ‘no’ helped fuel a passion still going strong after more than 20 years

A New Tradition: A ‘no’ helped fuel a passion still going strong after more than 20 years 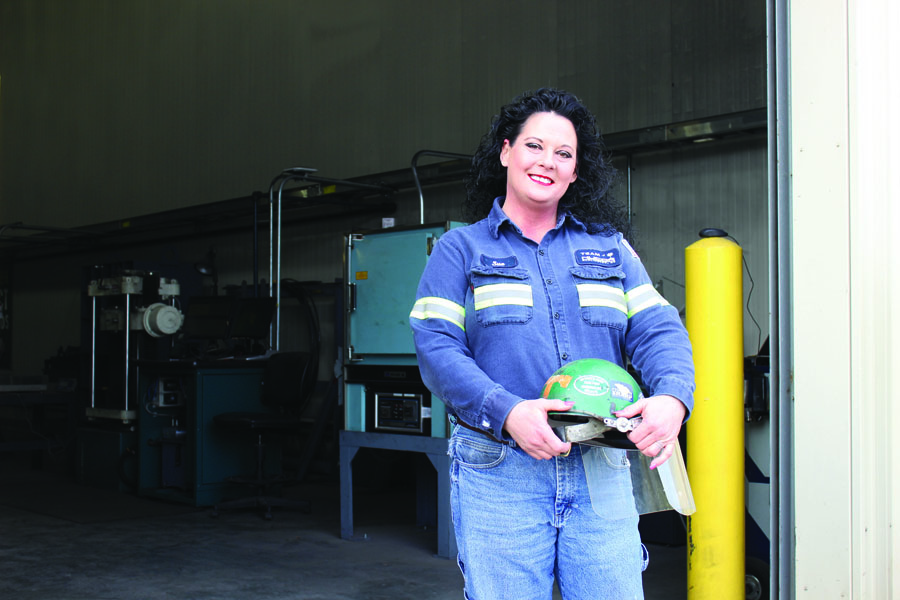 EDITOR’S NOTE: The News and Press will be running several stories in a series on women who work in male-dominated industries. Sometimes called non-traditional workers, these women found jobs and careers that they love and don’t let gender stereotypes keep them from pursuing their passions.

When Sue St. Armour went for the first interview after getting her welder certification, she felt good about the process. She did a sample weld to show what she was capable of and left feeling like she had done a good job.
“I stopped by a shop and talked with the guy on shift,” St. Armour said. “He told me to come back and do a welding test and we could go from there. We talked about me doing third-shift and I took the pipe-welding test.”

After taking the test, she even got a call back.
“He called me in a day or two and asked me to come back,” St. Armour said. “He brought me in and said ‘Hey, you did excellent. Everything was great; you’re test passed. Unfortunately, my boss is concerned that you would be a distraction at night with the men. So, unfortunately, I can’t hire you but you’re a great welder.’ That didn’t upset me; it didn’t make me mad. It just made me want it more.”

Originally thinking that she would go into a career in science, it was the final two credits she needed to graduate high school that sent St. Armour in another direction completely.

“I had to have two credits for my senior year so I found a school within our district that allowed you to take two classes during the summer,” St. Armour said. “I took an English and then an agricultural class. In that agricultural class is where I got my first introduction to welding and I fell in love with it. It came very easy to me and I enjoyed it. I was raised to work hard and it kind of just felt right.”

After graduation, St. Armour jumped into welding classes but not before making a deal with her mother.

“I talked with my parents and let them know that I was interested in welding,” St. Armour said. “I found a night class at Florence-Darlington Tech and I made a deal with my mother that if she let me take that welding class and I wasn’t successful at it, I would join the National Guard. She agreed.”

“That class was great and I learned a lot,” St. Armour said. “My teacher was very open to having a female in there; he was almost extraordinary. He took a lot of time with me, made sure I had everything right. I knew just from working with him, with his reputation, that as long as I could succeed on my side that I would be successful at it. He gave me a lot of confidence. I was the only girl in that class but I’ve been the only girl a lot of times.”

To continue learning the trade, St. Armour enrolled in several more classes, eventually finishing a diploma program.
“I took two classes at night and then I went back and took the year long diploma program,” St. Armour said. “In the last semester at Tech, they would allow you to find a part-time job kind of hand-in-hand with the industry. I worked through my instructor and I got a job through Aluminum Ladder. It was a great place to work; everyone was nice. But that was still back in that time where females were kind of frowned upon. You were the only women in the shop. And back then, it was dirty, it was nasty. Sweaty. You just had to take all of that with a grain of salt, dig in and prove that you could do it. Work hard. Have a good attitude about it and things turn around.”

Several years later, St. Armour secured a job at Nucor. She said that experience has been amazing.

“Once you come in that gate you’re not a girl, you’re not a guy, you’re a part of the team,” St. Armour said. “As long as you come to work with a good attitude and a great drive to work, helping your team be successful, you get treated with respect. A lot of industries aren’t like this but at Nucor you are paid on a pay scale. It doesn’t matter if you are male or female because this job is going to pay you from X to X, as long as you meet the criteria and you work safe. Everything is level across the board.”

While millwork may have been dark and dirty when she started, St. Armour said that the industry has changed a lot.

“People still think about a steel mill as dark and nasty and some of it still is,” she said. “Then there are parts where all you do is you work in a control room. You work with animation and technology. You can work in a lab. The choices here are so great. As long as you put forth your effort, as a female, you will be successful.”

After welding for many years, she now works as a Quality Control Technician.

“We work hand-in-hand with the different departments, like our Rolling Mill, our shipping department, some of our customers and our melt shop to make sure we are producing a quality product for our customer,” St. Armour said. “We spend a lot of time with our teammates in the mills, down at shipping looking over steel, helping them out any way we can as a resource.”

That hands-on experience she got, starting in that first welding class, helps her still.

“Quality Control is different than welding but welding helped me get a base knowledge of steel and that comes in really handy,” St. Armour said. “That is one of those great facets of being a welder: you don’t have to be a welder your entire life. You can be a supervisor, you can go into engineering, metallurgy, inspection; welding is basically math and science and that is what we do here.”

St. Armour said that she would encourage other women to follow their passion, regardless of where it takes them.

She also said that she would encourage them to explore careers they may be interested as early as the opportunity presents itself.

“The earlier you can get started the better, that way you can build on your skills, like your math, your sciences,” St. Armour said. “We deal a lot with chemistry in our melt shop. Also, start getting good communication skills at a young age; being able to walk in an interview and say this is who I am and this is why you need me. Those things you have to learn early or it causes you to not be as successful as you could be. Get into a vocational class, whether it’s welding or electrical, coding, programming, all of those things. Getting an understanding of how all those things work, make you a better person and a better leader.”