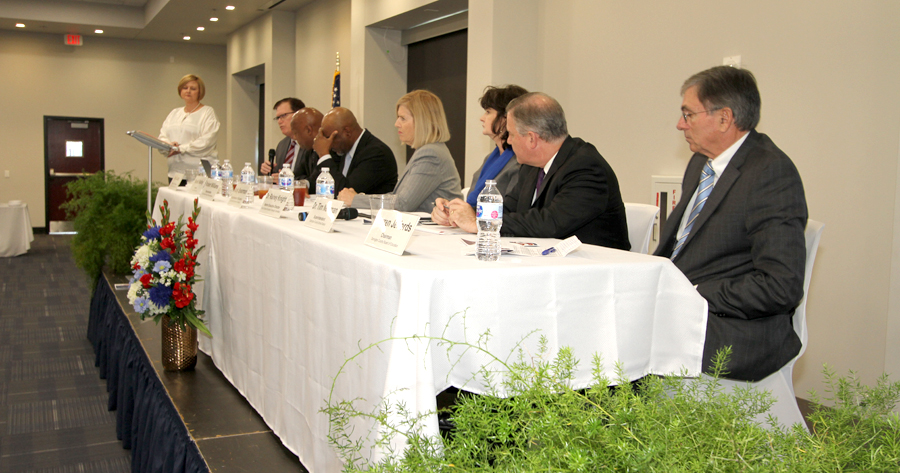 When S.C. Education Superintendent Molly Spearman came to Darlington on Friday for the county school district’s annual Education Forum, she said this was the 11th teacher forum she’d attended since the school year began.

When S.C. teachers bring up concerns or problems, Spearman said, “We will hear you. … Sometimes, it takes a little while to make it happen, but we are working on it.”

Spearman was the star at the Nov. 1 forum, sponsored by the Darlington County School District Leadership Council and held at Mayo High School for Math, Science and Technology.

The officials dealt with pre-written questions from several Darlington County School District teachers, most of them focusing on how the state can help teachers do more to help students. Some samples of the officials’ responses:

— “We feel like we’re getting a good handle on what teachers want,” said Lucas.

— “I listen to the teachers,” said Williams. “I’ve had these conversations with many teachers. … I value your decisions. You have to get involved … and let us know the concerns you have. … You play a vital role in the lives of those kids that are coming up.”

— Spearman said “it is not the right time” for a bill in the Legislature that would let parents take their kids out of public schools and receive the state portion of education funds for those children. Until the state fixes its “antiquated funding system,” Spearman said, we should put state funds only in public schools.

— The state is working to make sure every public school in South Carolina has a school resource officer, a law-enforcement officer assigned to that school, Spearman said. But she said the state is still a few hundred SROs short of that goal.

— Newman said it’s really “all about having teachers feel better about what they do on a daily basis. … We have to make sure it is a positive, warm climate” for teachers.

— Jeffords and Newman noted that housing options for teachers in Darlington County are somewhat limited.

“A lot” of teachers in the county school district are having to go outside Darlington County to find appropriate places they can rent or buy, Newman said. (Some school board members have talked about the possibility of one day converting the 200-year-old St. John’s Elementary School in Darlington into teacher housing.)

— On the topic of “behavorial/emotional issues in our schools,” Spearman said that student suicides are not unknown in South Carolina. “Talking about it is not going to make it happen more often,” she said.

Also at Friday’s forum, the Hartsville Messenger’s acting editor, Jim Faile, was honored for his 35 years of covering education in Darlington County, both at the Messenger and the News & Press.

Faile received the annual Jimmy Newsom Signature Award, named for Newsom, a former county education superintendent, and awarded to a nominee selected by teachers for having made a significant impact on students, teachers and schools in the district. Faile, a former editor of the News & Press, has been covering local education issues throughout his more than three-decade career as an editor and reporter in Darlington County.

When Faile received the award from Newsom, he had a camera strapped around his shoulder. He came to the forum to cover it for the Messenger and the (Florence) Morning News, the Messenger’s sister newspaper.