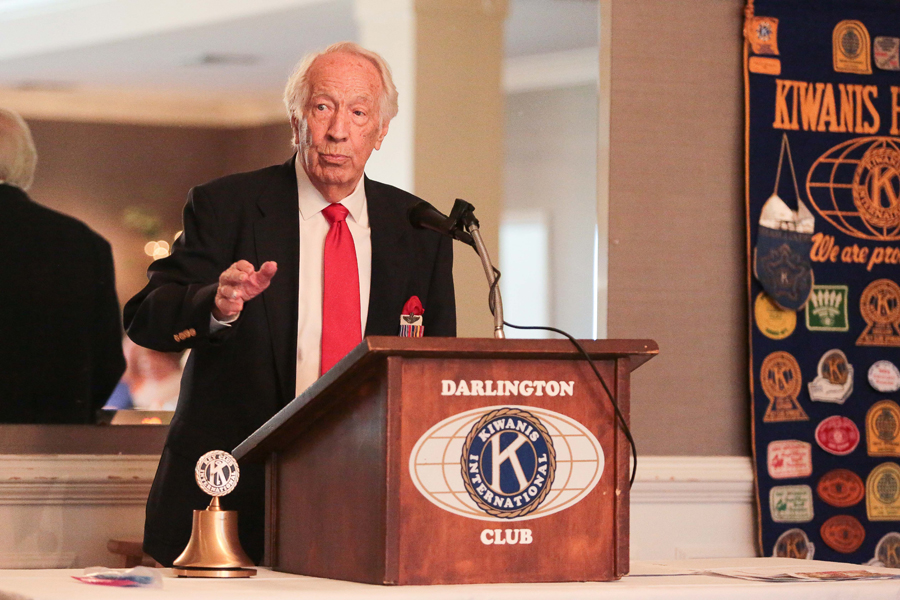 Rocky Gannon was only 17 when he enlisted in the military, but – as he told members of Darlington Kiwanis at a Nov. 8 luncheon – he dreamed of becoming a pilot since the age of 6. That’s when Rocky’s dad took him to a public appearance by three legendary aviators: World War I flying ace Eddie Rickenbacker, record-setting solo flier Charles Lindbergh and pioneering pilot Amelia Earhart.

“(Rickenbacker) was starting Eastern Air Lines, and he had sent a plane out to pick up two of his flying buddies and bring them to Atlantic City,” said Gannon. “I got to meet those great aviators … and I thought that’s what I want to be when I grow up.”

Gannon was a high school junior in Ocean City, N.J., when the Japanese attacked Pearl Harbor in 1941. While working as an assistant projectionist at a local movie theater, Rocky saw movie star Jimmy Stewart in a recruitment ad that revived his childhood dreams of flying.

“He didn’t wait for the draft. He enlisted as a private, and Jimmy Stewart was a big star,” Gannon said. His excitement grew when Stewart’s ad revealed that due to an urgent need for pilots, the Army was dropping the four-year college-degree requirement.

“Anybody between 17 and 23 could take the test for pilot training, without regard to formal education. (They said) if you can take these tests and pass them, we’ll make you a pilot,” said Gannon. “I was 17, peak of intelligence, so the next day I skipped school, went to Philadelphia and took my first test.”

His determination and confidence paid off. The day before the junior prom, Rocky apologized to his stood-up date (who, he said, still hasn’t forgiven him 76 years later) and boarded a troop train to Miami Beach.

At age 17, Gannon flew the B-17 Flying Fortress in combat, and graduated to the B-29 Super Fortress by age 20. He completed hundreds of combat missions during WWII, the Korean War, in the Belgian Congo and the Vietnam War.

Over his 37-year military flying career, Gannon logged over 6,000 hours in 34 different aircraft ranging from bombers to transports, from gliders to fighter planes. He earned 50 military awards and decorations, including the Distinguished Flying Cross, the Bronze Star, numerous air and meritorious service medals and the Vietnamese Cross of Gallantry.

During his service, Gannon continued to pursue his education, eventually earning bachelor’s and master’s degrees. He retired from the Air Force in 1980 as a colonel. Gannon then worked as an international aviation consultant, and served several years as executive director of the Florence Regional Airport until his retirement in 1993.

Though he served 15 years overseas and lived in almost 40 different homes, Rocky’s wife, Roberta, has stuck with him for 67 years. Their family includes three children, 10 grandchildren, and four great-grandchildren. Gannon serves on nine boards and commissions, and – as befits an Eagle Scout – is a supporter of the Boy Scouts of America. He was named S.C. Aviator of the Year in 2001, and was inducted into the S.C. Aviation Hall of Fame.

The Gannons have lived in Darlington for over 30 years, very close to Rocky’s twilight arch-nemesis: the flood-prone Black Creek. “Black Creek is killing me,” he said in closing, drawing laughter from luncheon guests.