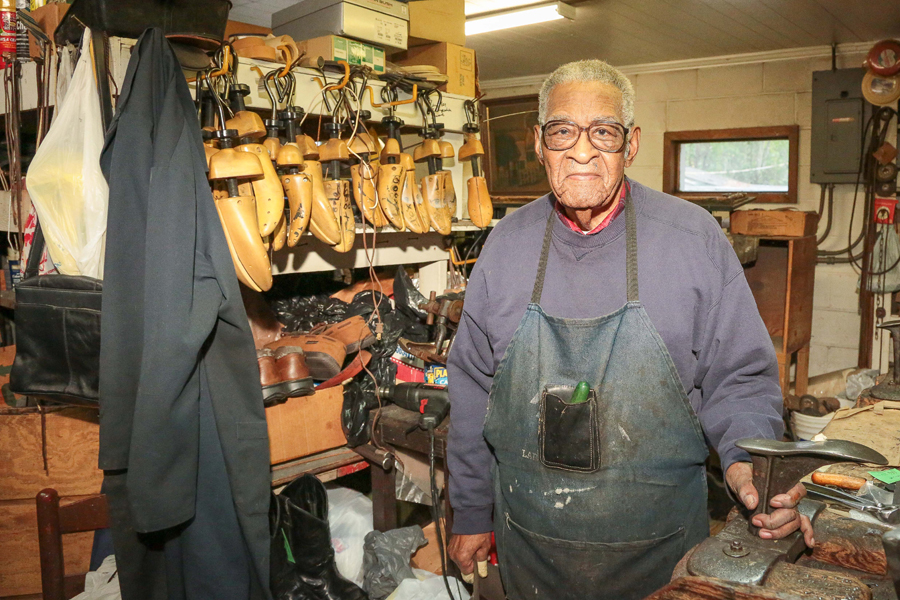 Perry Simon has retired after more than half a century running Simon’s Community Shoe Repair of Darlington. Photo by Samantha Lyles

The new year traditionally marks a series of beginnings, but the close of 2018 saw the end of a very long Darlington tradition as Simon’s Community Shoe Repair shut its doors for good.

Proprietor Perry Simon, 91, says he decided to shutter the business for several reasons. You might think his advanced age would be tops on the list, but that’s not necessarily true. While Simon admits that he has a bit less pep than he used to, he is still quite capable of running the shop and using the industrial grinding, polishing, and stitching machines to fix broken shoes.

The chief reason for the closure, he says, is that the shoe business has fundamentally changed. Where people once invested in quality leather shoes and maintained them with new soles or replaced broken heels, most shoes that people buy now are relatively disposable. Simon says that he will occasionally get a customer whose prized sneakers are losing their soles, but those simple repairs don’t take much time or offer much in the way of compensation.

“Take this here,” says Simon, displaying a pristine white pair of Air Jordans recently brought in for some attention. “The sole was coming off, so I glued it back on. You can’t charge but a few dollars for that, and that’s hardly worth staying open for.”

Simon’s shop is a testament to the way things used to be, chock full of outsized machines geared to precisely polish a leather upper or specifically scuff a slick sole. Shelves are lined with dozens of shades of shoe polish and dye, all tinted to perfectly match a customer’s wingtips or high heels. Actually, figuring out how to match dye and polish colors to an indistinguishable degree was Simon’s first step into the business, way back in 1948.

“That was the first thing I learned, was the color of different types of leather. … When I learned about shoe repair, I learned from the ground up,” says Simon.

He recalls that he apprenticed with shoe repairman Carley E. Ervin after World War II, when the government sponsored veterans to learn new trades. Simon worked with Ervin until the late 1960s, and bought the business when his mentor retired. Simon relocated from Jessamine Street to Dargan Street in 1976, and Community Shoe Repair has been there – right next door to Simon’s house – ever since.

Over the years, Perry Simon has salvaged too many damaged shoes, purses, and leather goods to count. But he says he has enjoyed all the work, and feels good to know that his shop has served a valuable purpose in the community.

“I would like to thank the citizens of Darlington for their support in keeping this little shop going, to keep us operating. The neighbors nearby have always been very nice and kind, and whenever I needed their help, they were very helpful,” says Simon.

Asked what he will do in retirement, Simon wryly observes that at the age of 91, after working so hard for so long, he has probably earned the right to not do much of anything.