Home » News » Paula Deen: In a good place on the river of life

Paula Deen: In a good place on the river of life 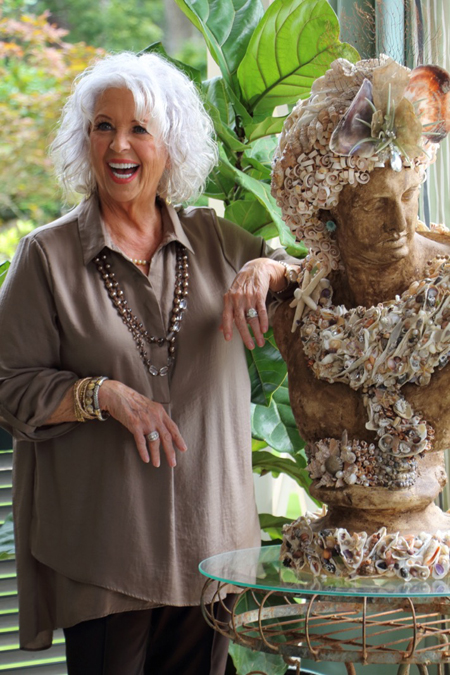 The hard work paid off, and today, art joins cooking as one of Paula Deen’s passions.

“There’s a lady in town—the ‘Shell Lady,’ who shelled our gas lanterns on the patio, and I went to her house because my magazine was doing a story on her. I thought, ‘I can do that because it’s easy.’ So, one day, my husband, Mike, took Aunt Peggy, me, and Bubbles (sister-like friend Susan Greene) out to an oyster bed.

“We were like pigs in the sunshine, honey. I just had on tennis shoes. I didn’t think to take any gloves. I was stupid, but I’ve done a lot of stupid things. I love using the oysters that I rake. I just love sculpting and it is therapeutic, honey. You forget everything except the next shell you’re going to put on.”

Paula loves to paint, too, but is quick to say she’d rather be a chef than an artist. “I’m not good at it. One of my best friends here, Donna Foltz, paints beautifully, and she wouldn’t leave me alone. She said, ‘I want to teach you to paint, Paula.’ She taught me a little bit, what I could absorb, and I just love it, but it’s not one of those things that come easy to me.”

Easy or not, painting has been good for Paula. In 2016, she joined President Jimmy Carter in Plains for an art class taught by Atlanta painter, James Richards. The fundraiser, “Painting, Paula and a President,” raised funds for Friends of the Jimmy Carter National Historic Site and the Plains Better Home Town program.

Wildlife catches her artist’s eye. “One year for Jamie’s birthday I gave him a painting of a bream. And that bream turned out so beautiful.” As she talked, the chef in her surfaced. “One of my favorite fish to eat. Lots of bones but you have to know how to eat them.”

She painted a portrait of Earl D. Squirrel before she let him loose, and she sent me an impressionistic image of a watercolor, an abstract of white flowers and foliage. It’s a flower she painted with President Jimmy Carter. It raises possibilities … lilies … the plumage of egrets … a wedding bouquet … a funeral arrangement, perhaps.

I asked Paula if she’ll use her art to illustrate one of her cookbooks. Laughter like shattering glass broke out. “Oh I doubt it, but wouldn’t that be fun. I am not talented and I really have to work at it. The shelling, though, is just so easy and so natural.”

And Earl D. Squirrel? His story deserves telling. “A baby squirrel fell out of a tree, and a worker knocked on my door, ‘We found this little baby. What do we do with it?’ I said, ‘Oh, you give him to me.’ And I raised that squirrel, and I called him Earl D. Squirrel. He knew his name and when I’d call him, he would come. I went to Pet Smart and got some good mother’s milk, baby food, and fruit and I’d feed him that.”

Paula set Earl free. “I was so sad. One day I opened the doors and I just set him down out on the back porch and said, ‘Well, he’s gone.’ I got on the sofa and fell asleep and the next thing I knew Earl was on the sofa. So, he didn’t leave, but the next time—boy, I didn’t want to let him go I loved him so much—I took him out by the pond and he scampered up the tree and I haven’t seen him since. When I go out, I say, ‘Earl D. Squirrel! Earl D. Squirrel!’ ”

Hopefully, Earl is out there somewhere. Meanwhile, that river called Life rolls on and Paula is in a good place.

“My furniture line is still very successful. My magazine is alive and well. I’ve got the No. 1 most-watched show on Evine, the shop-at-home network. We’re building multi-million-dollar restaurants all over the country, so, yes, I’m in a good place. God does not miss blessing me a day.”

She even has her own brand of pet food. “Someone got in touch with me—they knew how I feel about dogs, animals, and my cat, and said, ‘We’d love to come up with a dog food for you.’ Well, that fizzled out.” Then Paula met a man at a dog show. “He’s the second-largest dog food purveyor in the U.S. and I really liked him, so we reformulated the dog food and it is the best—Paula Deen’s Home Cooking.”

There’s a lot more Paula Deen wants to do. “I would love to be a voice in an animated movie, the voice of a Southern crab—a Southern crab!” Her grandchildren would get a kick out of that, of whom she says, “I’ve got so much to live for … my grandchildren.”

But what about the woman herself? Success hasn’t really changed her, has it? No, the little Paula Hiers that swam in her grandparents’ pool and the Flint River is still with us. She’s gracious and genuine and you can thank her parents for that. “My mother was very quiet and ladylike. My daddy had this huge over-the-top personality and a laugh that was contagious. I remember one day I came in from school and they had company. I didn’t speak to anybody. I just went straight to my room.”
Her dad made her come back into the room and speak to the guests.

“I made terrible grades in high school but I had one helluva good time. I’d bring home Fs, and Daddy would say, ‘Oh, honey, I know. I had a hard time with math, too,’ but the one thing he told me was, ‘Girl, I will get you if you’re ever unkind to anybody or if you think you’re better than the next man because you are not.’ He could forgive those bad grades but not bad manners or treating someone unkind.”

She paused while petting the dog that had just jumped into her lap. “You know, I truly care about other people. It’s not an act.”

During our interview Paula told me she would be leaving immediately afterward to go to the Mayo Clinic in Jacksonville. Her very sick brother, Bubba, was there. That escaped my mind at the interview’s end, and I asked her if my sisters Brenda and Debra, and family friend, Teresa, might meet her. We were all vacationing at nearby Tybee Island, and they were out on Wilmington Island Road waiting to pick me up.

She spent an hour with them.