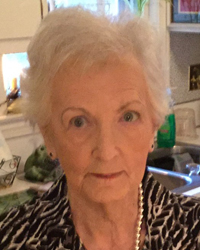 She was the widow of Lairon Carlton Bullard Jr. Born in Hope Mills, N.C., Elsie was the daughter of John Wesley Garner and Pauline Taylor Garner. She worked at First Citizens Bank for over 40 years as a teller, loan officer and branch manager.

Elsie was very civic-minded and served on the board of the Hope Mills Chamber of Commerce for several years. She was a member of the Darlington Presbyterian Church and Circle One. She enjoyed traveling the world and discussing politics.
She is survived by a daughter, Pam Vaughan and son-in-law, Eugene Vaughan of Darlington; two much-loved grandchildren, Claudia Vaughan of Boulder, Colo., and William Vaughan of Columbia.

She is also survived by a sister, Connie G. Koonce (Charles) of Fayetteville, N.C.; a nephew, Dr. Thomas Koonce (Robin) of Carrboro, N.C., and their daughter, Mary Fitzgerald Lairon Koonce; a nephew, Frank Bullard Jr. (Pat) of Little River and their children.

The family received friends from 10-11 a.m. Wednesday at the church, and other times at the home of Pam and Eugene Vaughn, 105 Georgia Dr., Darlington.

Memorial gifts may be made to Thornwell Home for Children, 302 South Broad St., Clinton S.C. 29325; or to a charity of one’s choice. A guestbook is available online at belkfuneralhome.com.

Born May 5, 1944, Gwen was the daughter of the late Woodrow Amerson and Marie Windham Amerson. She worked in the cafeteria at Carolinas Hospital in Florence.

She was a loving mother and grandmother who enjoyed gardening, going to the beach and always looked forward to going shopping with her granddaughter Brook once a week. Gwen attended Lakeview Baptist Church in Hartsville before her illness.

She was preceded in death by her husband, Billy M. Carraway; daughter, Billie Jean Carraway; her brothers and sisters-in-law, C.W. and Sylvia Amerson, Albert and Monica Amerson, Kenneth Amerson; her sister and brother-in-law, Mary Ethel and Marvin Amerson.

Born March 4, 1939, John was the son of the late James I. Pickett and Cassie Hudson Pickett. He was a “workaholic” who worked as an electrician for Perfection Gear, then Superior Machine, and most recently in maintenance at the Florence YMCA. He enjoyed fishing and liked to read. John attended Southside Free Will Baptist Church.

Josephine was born in Sardis Dec. 18, 1932. She graduated from Sardis High School with honors in 1949. Josephine was an avid athlete during her school years and was a star player for her basketball team. She worked from the age of 15 until she retired in 2010 due to health concerns.

Jo was married to Pearson Frederick Spears in 1952. They were married 44 years.

She worked for a local urologist for 25 years where she was a deeply loyal and committed medical assistant.

She also worked in Mortgage Finance and retail in her earlier years in which she would work two and three jobs at a time providing for her family. She enjoyed being around people and helping them through their problems. She never met a stranger.

Josephine was a devout Christian. She loved going to church and listening to music. Her favorite singers were her son, David Spears and grandson, Luke Killian. She enjoyed being around her family and friends. Her favorite pasttime was spending time with her grandchildren and great-grandchildren.

Burial followed at Mount Hope Cemetery. Funeral arrangements are being handled by Belk Funeral Home. In lieu of flowers, memorial donations may be given to St. Jude’s Hospital.

The family received friends in the funeral home chapel Friday.