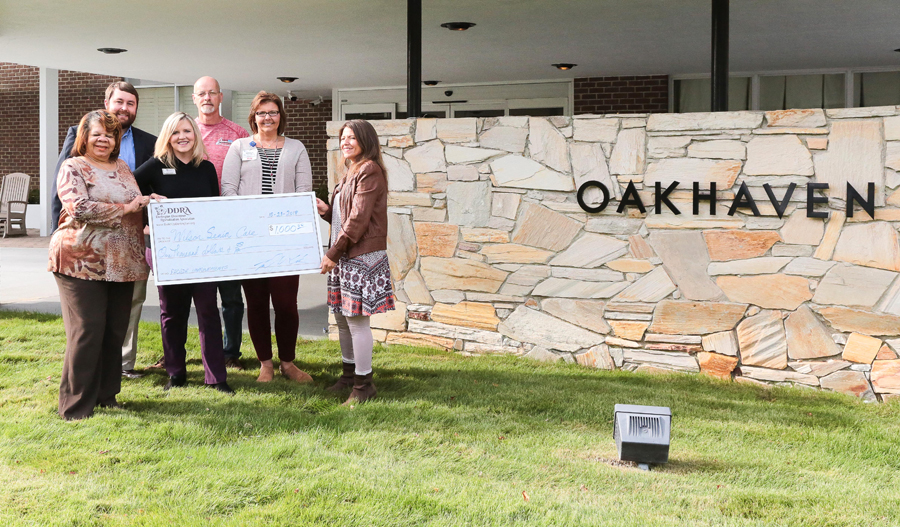 “We wanted to enhance the outdoor activities and environment for the residents,” said Tyler Lofe, executive director of Medford Nursing Center.

“Before, everyone was kind of hanging around by the sidewalk. Now, we have ample space for them to visit with family and friends out front.”

Kelly Pruitt, executive director at Oakhaven, said the new sign, grass, rocking chairs, and landscaping will improve the campus’ appearance, while other upgrades will streamline medical transport. A newly installed driveway and canopy at the building’s north end will steer ambulances away from the main entrance and eliminate any potential traffic snarls.

“The ambulance entrance makes it easier to pick up patients,” said Pruitt.
“It’s less disruptive, keeping the ambulances away from the front entrance,” added Dianne Dennis, Wilson Senior Care marketing director. She noted that all the improvements had a single goal: to enhance the quality of life for Oakhaven residents.

“Oakhaven is one of our oldest facilities, and we really wanted to give it a facelift and a boost for the residents and the community,” said Dennis.
Mayor Gloria Hines and DDRA board member Curtis Boyd agreed that it does boost community spirit when citizens – whether they’re individuals or corporations – take the initiative to beautify their property.

“It’s a fifty-fifty match on the reimbursement program, so if a business wants to update their signage or anything on the exterior frontage, they can apply to get funds up to $1,000,” said DDRA executive director Lisa Rock.

Though the facility looks much better, Lofe said that further upgrades are planned when Oakhaven celebrates its 50th anniversary in 2019. To mark this milestone, Wilson Senior Care plans to develop a park on the wooded lot beside Oakhaven so that residents and community members can enjoy the outdoors together.