Home » News » Living on Purpose – Every person chooses their own path

Living on Purpose – Every person chooses their own path 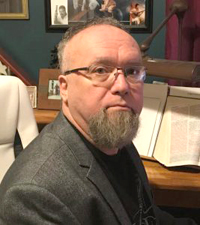 I had a serious conversation the other day with a middle aged man and we talked for a couple of hours about God. I’ve known him for years and we’ve had these discussions before but I noticed he has become stronger in his opinions, which, by the way, are based on atheism. He is a likeable person, hard worker, great husband and popular. He is also a very talented artist and sculptor and concentrates much of his art work on the dark world of the supernatural. He has studied Greek mythology and loves any type of artwork about this subject and is also very much into modern superheroes or any type of figure or being that has special abilities and powers. He collects books, posters, paintings, sculptures, comic books, and creates incredible statues of these creatures and has a waiting list of people around the world who want to purchase his work. I’m glad that he is gifted and successful but of course concerned that he will not consider the one who has all power and authority and is the creator of all things.

I know from our past conversations that he was not raised with any type of religious instruction or influence and never even entered a church until he was married in one. He loves history and has read about spirituality and has come to the conclusion that religion has always been used as a way to calm the masses and distract them from the discouragement and suffering of being controlled by tyrannical governments. To be honest, I’ve not really known that many atheist and as a Christian minister, I find it disturbing to hear someone say they believe God is nothing more than a figment of the imagination. He goes on to say that everything we see and know came from nothing and the Bible is just a storybook filled with fables and legends. He is also strongly convinced we are not spiritual beings and there is no such thing as an eternal life after this one. Of course, in between all of these statements, I spend a considerable amount of time explaining what the Bible says all the while realizing that I am using a resource that he does not consider reliable. Even though he has made up his mind against the Almighty, I also have faith and believe that with God no situation is hopeless and anything is possible.

I understand that God has given every person the free will to believe whatever they want and as we look around, we can see that people have definitely taken him up on that. In today’s world, it’s becoming more common to hear people say the Bible is not true and that all the thousands of gods and religions in the world are all the same. I’ve walked with the Lord for much of my life, and have come to the realization that we cannot change someone’s mind. We can relay God’s message and demonstrate his character, we can pray and confess that God will intervene, and we can hope the Holy Spirit will influence and persuade an individual to consider turning to Christ but the rest is in God’s hands. The gospel of Jesus has the power to convict the human conscience and stir the soul but ultimately each person who hears how God so loved the world that he gave his only son to be crucified and save us, will either choose to accept his offer of salvation or walk away from him. The individual who embraces the God of the Bible becomes a Christian while those who reject him have simply made the decision to acknowledge an alternative idea and follow another path.

I could fill the entire newspaper with reasons why everyone should become a follower of Christ but I know there are others who could also do the same about their own worldviews. I could tell stories from the Bible and I could share about those who were once unbelievers and have now miraculously turned to God and are excited, grateful, and filled with joy and peace. But you know, I’m not really thinking I can make anyone love God and like I said, I certainly cannot spiritually redeem or save anyone. In all honesty and sincerity, I just want to communicate about God’s infinite love for all of us and will pray that someone will want to know more about him.
Read more at billyhollandministries.com.