Players received a necklace pendant filled with dirt from the Anderson field where they won the State Dixie Youth Baseball Championship.
Contributed photo.

Lamar has long been a hotbed of athletic talent, as the number of Silver Fox state titles and NFL players can attest. The town’s history of sports excellence booked another chapter this summer as the Lamar Dixie Youth baseball team won two championships and vied for a third.

“This is the first-ever team to win the Dixie Youth Division 2 state championship in South Carolina, and they ended up going to the World Series in Lumberton. They played four games and ended up coming in third,” says Lee Andrews, Darlington County Parks and Recreation director.

“The difference between Division 1 and 2 is how many children you have within your area to play, similar to A, AA and AAA high school football,” says Jennifer Odom, mom of player A.J. Odom. “No one expected these boys to go this far, and honestly I don’t think the boys had any idea that they were actually making history while simply doing something they love to do. They didn’t charge the field with the expectations of any of this, they simply wanted to play ball!”

Adding more icing to the cake of team success, pitcher and first baseman A.J. Odom posted some terrific numbers at the plate. In the World Series, Odom went 5 for 8, and his average of .625 earned him the Dixie Youth World Series Division 2 batting championship. Asked how he managed to achieve this success at the dish, A.J. credits his coaches — Aaron Weaver, Jason Olson, and Alex Weatherly — for working with him to improve his technique. 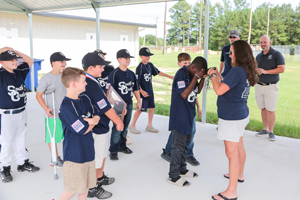 Known as “cheeseburger” for his perpetual, cheerful grin, A.J. Is a born sports fanatic whose third word (after Mama and Daddy) was “ball.” According to his mom, he also plays football, enjoys hunting, fishing, swimming, and generally anything that allows him to stay outside.

For the record, Jennifer says A.J.’s vision check showed his eyesight was “better than perfect,” so the young slugger’s mad tear might just be getting started. She adds that even though A.J. had a great series, her biggest proud-parent moment came when his team spirit and good sportsmanship was on display. 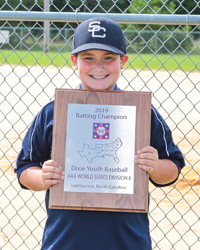 “As his mom, one of my favorite and most proud memories was when he looked at his coach and said, ‘Who cares if I got out, that’s an RBI, baby!’ Even the umpire shook his hand on that,” says Jennifer.

When team members gathered last week to celebrate their achievements, A.J. and Jennifer presented each player with a unique keepsake: a necklace pendant filled with dirt from the field where they won their state championship. To say that the kids were excited would be an understatement.

“I’m gonna wear this to school tomorrow!” one player declared.

Andrews, Odom and Hartsville Recreation director John Wall (who also serves as assistant Umpire In Charge for S.C. Dixie Youth baseball) all congratulated the team and joined player families for a well-earned round of applause.

“This group is special; they don’t and didn’t give up. They seemed to play better under pressure,” says Jennifer.

“As for us parents … we all had heart problems this whole past summer. The memories made for the boys and the parents are priceless. I wouldn’t have changed a minute of it.”