Kilgo answered most of the audience questions, which focused on several key concerns. The meeting lasted just over one hour, and full video is available on the News & Press’ Facebook page. 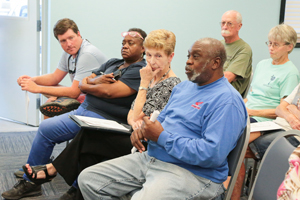 The current Darlington County Courthouse was completed in 1964 and opened in 1965. It houses operations for circuit court, probate court and family court. It also houses all the county’s administrative offices, such as the treasurer, auditor and planning department.

Suggs, who has served as clerk of court for 22 years, says the building’s biggest deficit is inadequate security. He cited incidents where defendants encountered witnesses and judges in hallways, and criminal defendants rode in the same elevator as citizens going up to pay their vehicle taxes. Suggs noted that at least twice, prisoners have escaped and led police on chases through the courthouse and around the Public Square.

The county’s current plan involves building a new and more secure judicial center on property adjacent to the Public Square. Administrative offices could be relocated to a new building, or remain in the current courthouse after renovation. Design and construction firm Michael Baker is currently completing a study on the feasibility of renovation. 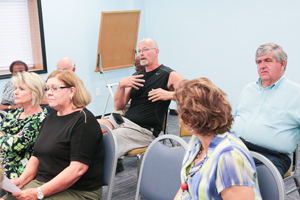 The Nov. 6 ballot will present Darlington County voters with two local questions; the first will be labeled “County Capital Project Sales Tax.” This question asks voters to allow the county to impose an extra 1 percent sales tax on retail purchases (not including groceries or prepared food) to finance these construction and/or renovation projects.

If passed, the new penny tax would bring our local sales tax rate to 10 percent, which Kilgo said is in line with many other counties. The penny tax would remain in effect until it raises $20 million or no longer than four years, whichever comes first.

Currently, a 1 percent sales tax in Darlington County raises approximately $5.6 million each year, so it’s possible that the tax would generate $20 million and end before the four-year time limit expires. 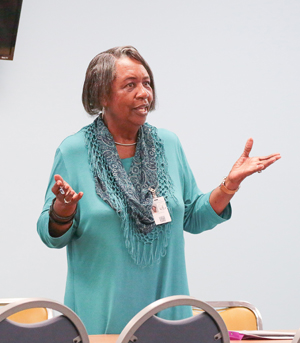 Kilgo noted that when the capital project sales tax expires, it cannot be renewed except by another public voter referendum, so misconceptions that council could renew the tax and divert funds to other projects are unfounded.
Financing the project with a penny sales tax would spread the burden of paying for the courthouse across all citizens of the county, as well as tourists who visit throughout the year. Other financing options would place the burden on property owners, who would pay increased millage rates on their homes and businesses.

No designs have been commissioned for a new courthouse, but Kilgo says he envisions a large one-story building with no space wasted on elevators, stairwells or atriums. He said he would prefer a classic design incorporating red brick and perhaps a decorative dome. Kilgo added that if the current courthouse were renovated, the exterior appearance could be improved with a wrap facade that would also improve its stability and resistance to earthquakes.

Guests were provided with a sample ballot allowing them to review the referendum for themselves. A sample ballot can be found in the Oct. 17 print edition of the News & Press.

The referendum text reads as follows:

If a majority of Darlington County voters answer “yes” to this question, Kilgo estimated construction of a new courthouse could begin by the end of 2019 or early 2020.