As some sections of the Blue Ridge Parkway reopened for the first time after being cleared from Hurricane Florence, there was little to suggest the storm would put a damper on a vibrant fall color season in the southern Appalachians.

Hagan ventured from Clemson’s campus up to an elevation of almost 5,500 feet near Devil’s Courthouse in Transylvania County, North Carolina, on Sept. 18 — the first morning that portion of the Parkway was reopened — for an annual scouting trip and found the foliage in the Pisgah National Forest relatively undisturbed.

Many forecasts for Florence had called for heavy winds and rain with the potential to dampen fall colors in the western Carolinas, but the majority of severe weather occurred closer to the coast, leaving only remnants of the then-tropical storm in the southern Appalachians.

Hagan, who has been making fall foliage predictions at Clemson University for six years, saw a stark contrast from the 2017 effects of Hurricane Irma, which reached the area after leaves had already begun to turn due to residual stress from a 2016 drought and blew many of them off trees with its strong winds. 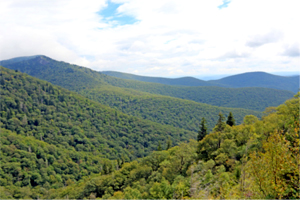 At an elevation around 5,000 feet, just below this perch near Devil’s Courthouse in Transylvania County, North Carolina, tree species transition from evergreens that remain green through the winter to deciduous trees that lose their leaves at lower elevations.

“There’s not a whole lot of color happening yet, but it’s coming soon,” said Hagan, an assistant professor in Clemson’s department of forestry and environmental conservation. “What a difference a year makes. Every year we come up here for my dendrology class, but I don’t think in the time that we’ve been doing this, there’s ever been as big a difference as we’re seeing between 2018 and 2017.”

As for when exactly the fall color season would begin, Hagan said that, given the prevalence of green still in the foliage above 5,000 feet, it is too early to tell, but noted the vast majority of fall color in the southern Appalachians would be dictated by the weather from mid-September through mid-October.

“You get some cooler weather and those nice bluebird skies, and the clear skies along with the cooler temperatures help bring out some of the brighter colors and particularly the reds and the purples,” he said. “If we can see that as we transition into fall, I think this could really line up to be a fantastic fall color season.”

From a perch near Devil’s Courthouse, Hagan pointed down to an elevation around 5,000 feet where the trees transitioned from such evergreens as red spruces and Fraser firs that remain green through the winter to deciduous trees that lose their leaves at lower elevations.

“This is a really neat spot,” he said. “This elevation is where you see the fall color happening first, and you’re going to see that change, that wave of color kind of working its way down the mountain, down in elevation as you move into fall.”

Hagan said the deciduous trees in the range of roughly 4,500 to 5,000 feet of elevation would be the first to change colors, noting that many of the tree species are the same that one might find in New England.

The prevalence of full, green foliage between 4,500 and 5,000 feet of elevation in mid-September in the southern Appalachians was a stark contrast to a year earlier, when Hurricane Irma reached the area after leaves had already begun to turn due to residual stress from a 2016 drought and blew many of them off trees with its strong winds.

“The species that make New England famous for having such a beautiful fall color season, we have them here too,” he said. “You’ve just got to be up at this higher elevation to see them.”

And while fall color comes later in lower places, an overlap in tree species occurs as elevation changes that can produce a richer palette of colors due to the diversity of trees found in the Piedmont region at the base of the Blue Ridge Mountains mixed in with more mountainous species.

“Every tree kind of produces its own characteristic color leaves,” Hagan said. “Birches, for example, are going to be yellow. Dogwoods are going to turn a purplish color. Sourwoods and fire cherries are going to turn red. Red oaks tend to turn red later in the year, as well. Really the more species you have present, the more diverse that palette of colors that you might see at a given point in time is going to be.”

Hagan said a good fall color season typically is defined as a season with a multitude of different colors across the landscape at the same time. He said all signs pointed to that outcome being likely this fall — even if leaf-seekers might have to wait a bit longer to see it.