Just after the start of the new school Darlington County School sat down with the News and Press to talk about his plans for the new year and the future of the district. 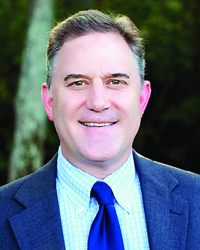 Newman started June 1 but spent time throughout the summer familiarizing himself with the district’s schools, faculty and staff.

“Darlington County School District is not a situation of we’ve got to fix so many things that are wrong to get better,” Newman said. “There are so many great things already in place and going on. It is just finding the right way to help us be successful.”

When Newman accepted the superintendent position he told the DCSD Board of Education that he would have a plan outlined for his first several months on the job.
“I had a 90-day plan coming in,” Newman said. “I started June 1st so that period ended September 1. Really, looking through my 90-day plan we’ve hit on pretty much everything, culminating with the community meetings (we did).”

Newman said that he when he first started meeting with district staff, he did more listening than he did talking.

“MY process started with listening first to all the different areas of the district and then deciding what the priorities were that we needed to put in place for the school year based on those listening sessions,” Newman said. “I think the pillars and the goals that I shared during convocation really came from all that. The pillars are my beliefs about education in general.

They are what I believe every district should have and what they should always be focused on regardless of the district location.”

The four pillars will remain the same, Newman said, and he will reference them often.

“Everyone will hear the pillars and I will continue to bring those up,” Newman said. “I will always ask how things relate back to the four pillars that we have. How does it relate back to community and helping us connect more? How does this help us with helping our students be more successful in understanding their current place in this particular situation and where we desire to see them go.”

The goals will change as the needs of the district and its students change.

One area of improvement that is needed is in testing. In a recent board meeting Newman said that he and board members will take an in depth look at scores.

“I know where, in general, our test scores are for third grade in the district but I want to go much more deeper into the process,” Newman said. “Not only does it matter to me what the overall scores are for third graders in ELA in Darlington County, I want to know by school what they are…by teacher what they are…by student what they are. What we are trying to help our teachers to build on is, if you know exactly where a student placed, so to speak, on tests and what their achievement level is in advance instead of waiting three months to figure out that this student needs help with this, then you can pre-plan how you are going to handle that.”

Making sure that all students, whether exceptional education or an Honors student, is working to their full potential.

“Is your honors student who always make A’s really growing as much as they can grow,” Newman said. “Are we pushing them as much as they can be pushed? The same thing with special education. Our students will disabilities and learning needs, we have to help them not only learn but interact and function in ways that move them along with their peers.

One initiative that Newman moved swiftly with at his start was implementing block scheduling. The district has used it at one point but dropped it during the recession years to save money.

“I read old board minutes to try and get a feel of what the board had been tackling,” Newman said. “I realized that the block scheduling conversation had been doing on for a while. That was unusual for me because every place I’d been was on block scheduling and most of the state of South Carolina is on block scheduling at most traditional high schools. I wanted to look at something that looked like we were making progress immediately. That seemed like a pretty easy one to start with because everyone seemed in favor of doing it they just didn’t know how.”

When Newman began taking a serious look at the issue he had a large potential stumbling block to overcome: funding.

Going back to block scheduling allows students to have time for extra learning opportunities.

“From my perspective, block scheduling is going to free us up for several of my initiatives and thoughts,” Newman said. “Over four years, you get 32 credits, potentially, in high school versus 28. More importantly, you can gain dual college credit. The chance for our children to gain as much of that as they can before they go to college is financially great for families. Plus, it gives our kids confidence when they do enter college if that is their path. If they aren’t a college track student it frees up time for other things.”

One underutilize DCSD asset is the Darlington County Institute for Technology, which has a lot of certification classes that can take an earn a good living right out of high school or with an associates degree.

“Before, our students did not have the time to come from Hartsville or Lamar, even Darlington High School in some cases, to DCIT,” Newman said. “The block schedule immediately frees us time for students to participate in the programs there. We had a 50 percent increase in enrollment at DCIT because of that. Our goal is to continue looking at how we can offer more programs for students that they are interested in.”