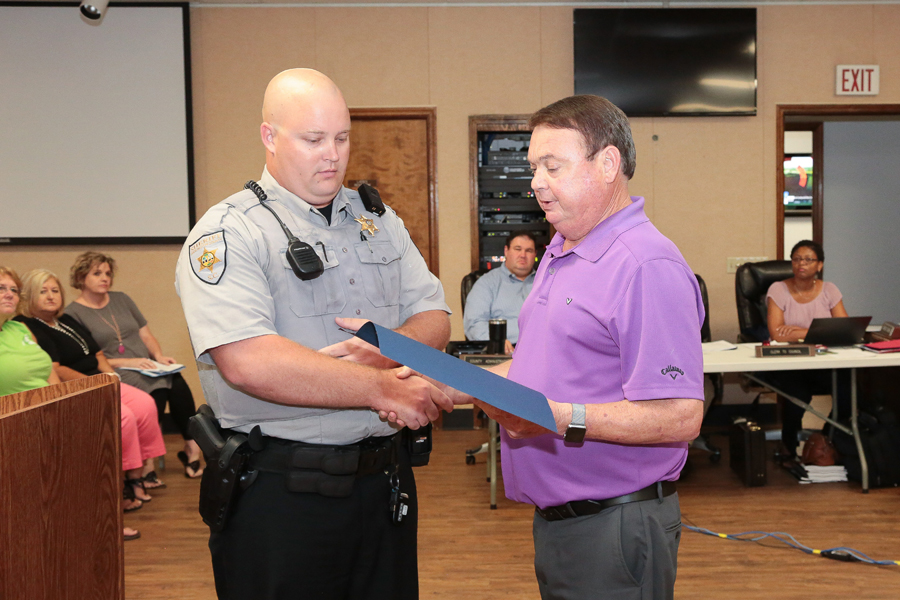 Earlier this summer, Taylor was awarded the 2018 South Carolina Sheriff’s Association Deputy of The Year Award for actions above and beyond the call of duty during two separate incidents that occurred on September 12, 2017, and January 2, 2018.

On September 12, Deputy Taylor, a certified paramedic, responded to a seriously wounded gunshot victim and provided medical assistance. Taylor was able to stem the bleeding until EMS crews arrived. The resolution noted that “his quick reaction and proper use of his medical abilities saved the life of the victim.”

On January 2, Deputy Taylor provided medical assistance to small children who were injured in a one-car multiple fatality traffic collision. The resolution states that Taylor further assisted county EMS by driving the ambulance so the medical crew could focus on “life-saving measures to preserve the life of a child.”

In other matters, Council passed Resolution No. 694, authorizing a Law Enforcement Assistance Agreement between the Town Of Lamar and the Darlington County Sheriff’s Office to provide a deputy who will exercise the administrative duties of Lamar police chief. This arrangement came about due to the retirement of Chief George Wilkes at the end of August.

The Town of Lamar will compensate the DCSO for the deputy’s salary on a monthly basis until a new police chief is in place. Sheriff Tony Chavis told Council the arrangement is valid for six months, or until Lamar Mayor Darnell McPherson hires a new chief.

County administrator Charles Stewart gave Council an overview of the fiscal year 2017 audit, conducted by accounting firm Mauldin & Jenkins. The audit summary stated that some material weaknesses were identified, chief among them an “overall lack of appropriate controls implemented at the County during the fiscal year. The County did not properly account for activity, or prepare and review all reconciliations typically required in a strong accounting system.”

The audit noted that this was a repeat finding from the prior year of 2016. It suggested that the county should look at accounting-related staffing and determine “if an adequate number of qualified people are currently available to address the condition” and provide “timely recording, reconciling and reporting of County operations and financial and non-financial activities.”

“You have a very healthy fund balance. You have money that can be used for some capital projects, and that’s something staff will start to bring forward to you over the next six months,” Stewart said, adding that if the county directs some of the fund balance this way, it will not need to levy extra tax millage to pay for capital projects.

Council approved a Darlington County Fire District expenditure of $33,615 to purchase 15 new sets of protective bunker gear from Newton’s Fire & Safety Equipment of Graham, NC. The request for funding included a letter from Honeywell PPE (manufacturer of the bunker gear) confirming that Newton’s is the sole distributor and servicer for these products to the Darlington County Fire District.

A bid contract to pave Flatnose Road with $108,680 in County Transportation Committee funds was awarded to Palmetto Corp of Conway.

Also on the agenda, Council approved second reading of Ordinance 18-09, affirming that a manufacturing facility belonging to Flakeboard America Limited is located in the jointly owned Darlington-Marlboro County Industrial Park and agreeing to the distribution of any and all FILOT (Fee In Lieu Of Tax) proceeds collected from that entity.
Ordinance No. 18-10 also received second reading approval. Upon passage of third and final reading, this measure would amend the 2018/19 budget and allow the Darlington County Library System to receive and expend a $10,410 South Carolina State Library Grant. The funds will be used to develop an educational program teaching local businesses and library patrons how to use 3-D design programs and printers.

A carry-over was requested for second reading of Ordinance 18-11, which would develop a multi-county park with Lee County and delineate the governing of said park and the properties to be included.

A title-only first reading (no vote required) was held for Ordinance 18-12, establishing the distribution of FILOT revenues from Project Watauga, a solar energy generating installation jointly located in Darlington County, Florence County, and the Town of Society Hill. According to a resolution of Society Hill Town Council, the company behind Project Watauga anticipates a total combined capital expenditure of at least $3,192,000.

Prior to second reading of this ordinance, a public hearing will be held at the October 1 Darlington County Council meeting so that citizens may ask questions and express opinions regarding Project Watauga. That meeting will be held at 6 p.m. in the Courthouse Annex/EMS Building at 1625 Harry Byrd Highway in Darlington.