Council moves ahead with EDA grant 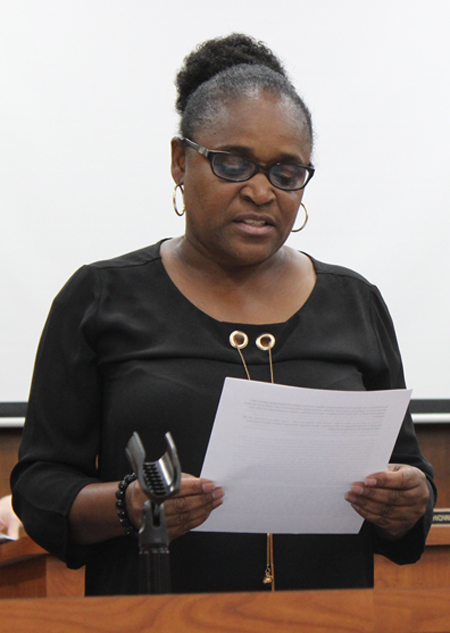 With a new vacuum truck online, the citizens of Darlington are beginning to see some improvement to storm water issues around the city. During the September 4 council meeting, one of those citizens thanked council for what they have been doing.

“Some of you may remember me…I have the storm water problem on West Broad Street,” said Rose Pruitt. “I am here tonight to thank each and every one of you for making that attempt to really get a hold of the storm water issues in Darlington. Clearly, I am not the only location that has those issues. That fine new vac truck that you’ve got is doing a really good job. of course we haven’t had rain in four weeks so we won’t really know how much its helped, but, we are hopeful.”

Pruitt said that because there have been improvements the city needs to use the momentum to push forward.

“We’ve had a hundred years of storm water systems that have been neglected,” Pruitt said. “It is really going to take an effort to clear that out because it is one big interconnected system. I know at my location they ran into some issues. They’d clear out twenty feet and then it would be totally blocked. There are probably going to be some requests before you in not too long, if they haven’t come already, for some additional equipment for that truck to maybe help bore out some of that material. I hope that you’ll look favorably on that. I am really here tonight to thank you for making that effort; I really appreciate it.”

In other business, council revisited a vote for a Rural Infrastructure Grant. In a previous meeting, council members gave their approval to Davis & Brown Inc. to apply for a grant on the city’s behalf for the Joe Louis Lift Station. The vote on who to give the Rural Infrastructure Grant writing to was split, but the majority voted in favor of Davis & Brown. During the Sept. 4 meeting, council learned that a better grant was available through the Economic Development Administration (EDA). If the city were to be awarded the EDA grant they could take care of more of the city’s pump stations, not just the Joe Louis lift station.

“I talked to the state EDA Director and she said that there was $147 million dollars available in the Southeastern United States,” said City Manager Howard Garland. “EDA money is usually tied to job creation but this money is not. The grant is an 80/20 match and there is no limit as to what you can apply for. As it stands right now, the staff recommendation is that we put in for the EDA grant instead of applying for the RIA simply because there is a larger pot of money available for the EDA grant.”

After some discussion over the fine points of the EDA and RIA grants, council voted to instruct the city manager to pursue the EDA grant, trying to tie four lift stations together, and withdraw the RIA grant.

The application needs to be submitted by the middle of October.

During the council comment portion of the meeting, councilwoman Carolyn Bruce read a letter addressing information being spread on social media about her.

“It has always been, and will continue to be, my intent to do what I believe is best for the City of Darlington. I will continue to review information, ask questions, research and make my decision carefully after doing such. In the last several weeks, there has been false accusations made against me by both citizens and, sadly, some members of council. Tonight I stand before you to set the record straight. After the vote on August 15, 2018 of 4 to 3 to award Davis & Brown the RIA grant, I was approached in a very aggressive way by someone who questioned my vote and basically expressed her total disappointment…Also, someone who is not a citizen of Darlington took to Facebook and accused me of voting against a black female-owned engineering firm and being paid off. Let me set the record straight, Lathan Consultanting, LLC is not a black female-owned engineering firm, nor is Lathan Consultanting, LLC licensed to perform any engineering projects in the City of Darlington. It is just what it says, a consulting firm. As I stated earlier, I take my role as Mayor Pro Tem very seriously and I am not bought nor paid for by anyone.”