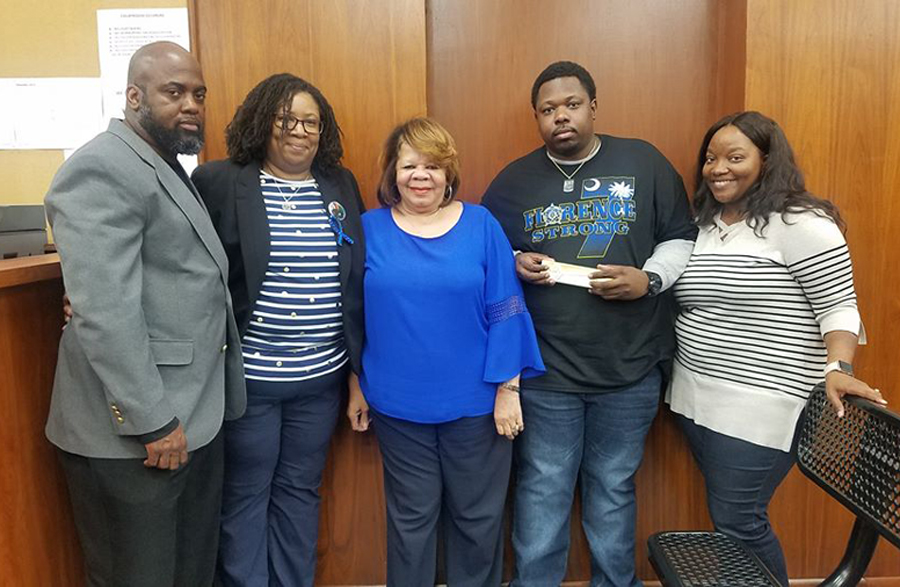 The family of a slain police officer who lived in Darlington got a key to the city Nov. 13, and that’s not all the honors City Council plans for Sgt. Terrence Carraway.

Council also hopes to rename a street and plans to name a playground after Carraway, a veteran Florence Police Department officer who was killed Oct. 3 when a Florence County gunman opened fire on several law-enforcement officers, wounding five and killing two.

“That’s a hero,” Darlington Mayor Gloria Hines said of Carraway, who she had known since he was a child.

The mayor presented Carraway’s family with a golden key to the city, and council voted to endorse renaming Southern Pine Street after Carraway and naming a playground (a former Little League field) after him. Changing a street name will require an OK from the city planning commission and a public hearing. Residents on the street will be contacted and asked for their reaction. Names that council members discussed included “Sgt. Carraway Street,” “Carraway Street” and “Sgt. T. Carraway Street.”

“I’m just humbled,” said the officer’s widow, Allison. She said her husband’s death was “a needless sacrifice,” but added: “The legacy of Terrence Carraway will live on.” She and her family members got a standing ovation from the audience at the council meeting at City Hall.

Other business before council was more contentious. Residents rose to talk to council about two recent political incidents causing ripples in the community – an advertisement in the News & Press in which a Lowcountry political consultant blasted City Councilwoman Carolyn Bruce and a later conflict between another councilwoman, Sheila Baccus, and a woman Baccus barred from a Ward 1 constituents’ meeting.

One resident, photographer Andrea Knapp, blasted the advertisement that consultant Donald Gilliard purchased in the Oct. 31 News & Press. The ad accused Bruce of “selling out” black voters on an issue involving the city’s hiring of an engineering firm. Knapp found the advertisement racist, defended Bruce and ripped City Council for not publicly standing up for her.

“For every positive thing that happens in Darlington – the Sweet Potato Festival, the Christmas Lights, A Taste of Christmas, everything the Greater Darlington Chamber (of Commerce) does – all of this gets (lost) when horrendous behavior we have seen is accepted,” Knapp told council. “All you’ve done is promote racial disharmony in the community.”

“The City Council, the mayor, are totally disrespected,” Jules said. “It is just unheard of. . . . I know this is black and white. I don’t care what anybody says. It’s always been black and white.” She told council that “active assistance” from law enforcement officers is needed at council meetings, “because they are that bad.”

On another issue, councilwoman Baccus defended her decision to bar Darlington resident and government watchdog Anna DeWitt from a recent meeting of Ward 1 constituents. DeWitt often shoots video of public meetings, and Baccus said the Ward 1 residents at the meeting “did not want to be on YouTube; they did not want to be on Facebook.”

DeWitt told the News & Press that the Ward 1 meeting had been billed as open to all and that Baccus barred her from the meeting on the grounds that she wasn’t a Ward 1 resident.

(Earlier, two of the residents who spoke to council took opposite sides on the DeWitt/Baccus conflict. Knapp criticized Baccus: “You said all are welcome. Why did you kick her out?” Jules praised Baccus and criticized DeWitt: “To have someone come in to try to record a community meeting, to me, that lets the other citizens know, ‘I shouldn’t talk. I shouldn’t say anything.’”)