Citizen to County Council: ‘why did the courthouse referendum fail?’

Home » News » Citizen to County Council: ‘why did the courthouse referendum fail?’

Darlington County Council’s Dec. 3 regular meeting began with a question that remains on the minds of many – what caused the courthouse penny sales tax referendum to fail? 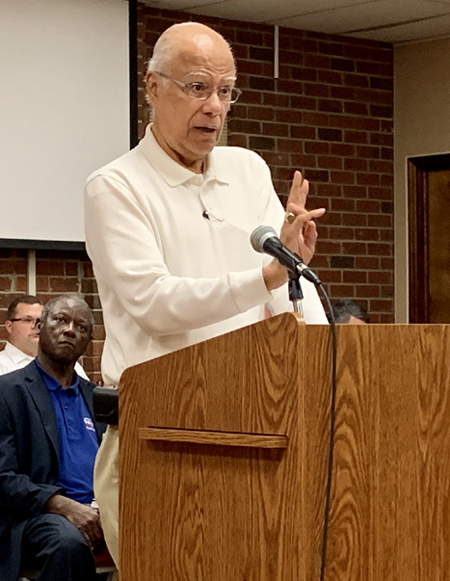 “Why didn’t the one-percent tax pass?” asked Linwood Epps during citizen’s comments. “I don’t know. I voted for it.”

Epps said that following the defeat of the County Capital Project Sales Tax, which failed on Nov. 6 by a vote of 11747 to 10618, he asked other voters why they chose not to support it. He said that many expressed worry or confusion about exactly how the county would have spent the $20 million they wished to raise via a new one-percent sales tax.

According to Epps, voters wanted more details about the county’s plans. He said people didn’t know how many new buildings would be constructed, or where, or even what would become of the exisiting courthouse. He pointed out that even though the county made initial moves toward a courthouse penny tax two years ago, no solid plan took shape in the interim.

“We still don’t know if we’re going to build two buildings, one building, renovate one building. When are we going to find out what you want $20 million for? A lot of people want to know those answers,” said Epps.

Council member Lewis Brown (District 7, Hartsville / Kelleytown) commented on the issue later in the meeting, noting that legal protocols prevented council members from publicly discussing the referendum before the question was settled.

“There was a fine line and we had to be very cautious about making any comments, so it may sound like we were not interested, but we were restricted on what we could and could not do during that period,” said Brown.

Also at this meeting, retiring Council member Mozella “Pennie” Nicholson (District 6, Hartsville) received a plaque from chair Bobby Hudson honoring her term of service from 2003 to 2018. Fellow members of Council thanked her for her service and wished her well. 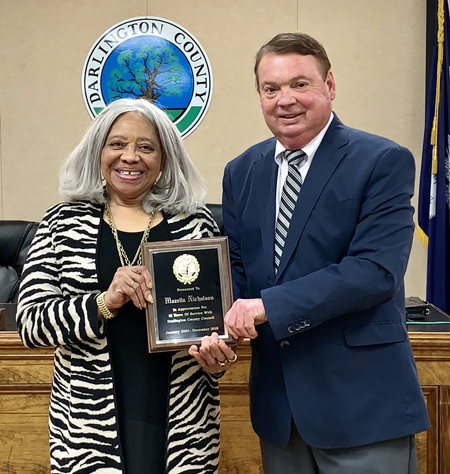 “I just appreciate all the years I’ve been able to share with our citizens of Darlington County and my many colleagues that have changed over the years,” said Nicholson. “I did the best I could with what I had.”

On the regular agenda, Council held a public hearing and second reading for Ordinance No. 18-14, which would amend the FY 2018/19 budget to add two new employee positions. The ordinance extract explained that revenues collected by the Darlington County Treasurer’s office would be used to hire an additional tax clerk and provide an additional position for a Deputy/Assistant Administrator. The supplemental funds requested total $70,174.

No citizen spoke during the public hearing, and Council passed second reading of this ordinance without objection.

Darlington County Council’s next scheduled meeting is Wednesday, Jan. 2, 2019 at 6 p.m in the Courthouse Annex located at 1625 Harry Byrd Hwy in Darlington. This meeting will begin with the swearing-in of County Council members and election of officers.