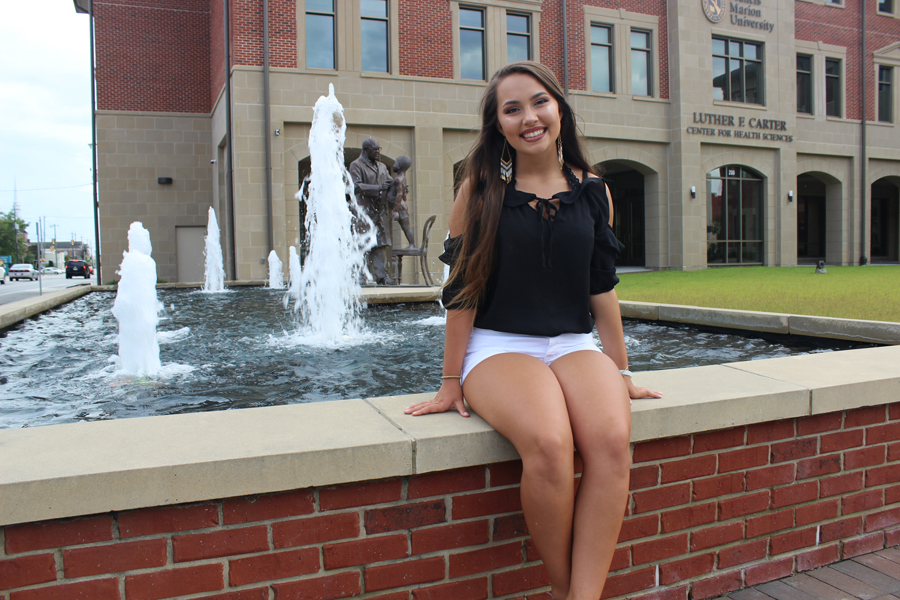 Caroline Floyd, a senior at Darlington High School, wants to pursue a career in medicine after seeing the difference a gentle touch can make to patients in the hospital. Photo by Melissa Rollins

When Caroline Floyd takes the field this season as a varsity cheerleader for Darlington High School, it will be a small reminder to her family that she should never have been able to be a high school cheerleader at all.

Floyd is an active high school student making the most of her senior year. She serves as the treasurer for the Darlington High School Student Government, editor for the Key Club and is a member of Health Occupation Students of America (HOSA).

When she was a pre-teen, though, her family was in a serious car accident that doctors told her would lead to a wheelchair, not the pom-poms and school spirit cheers that she had been looking forward to in high school.

That car accident, however, helped her find the direction she wanted to take in life.

“I got interested in medicine when I was eleven and I got into a car accident,” Floyd said. “A drunk driver hit us head-on and I broke three vertebras in my back. They told me that I would never walk again; basically, no one could understand why I wasn’t paralyzed.”

As a young woman preparing to enter middle school, Floyd said that news was extremely hard to hear and she didn’t want to accept it.

“They said that they were going to do reconstructive surgery but that I would not be able to walk,” Floyd said. “I prepared myself for that but then I was able to walk after it. It was really amazing. I was in the hospital for two months and I just fell in love with medicine. While I was there, I realized that there were people who make your stay better and there are people who make it harder. I wanted to be the one to make it better. So, I decided then that I want to be a Physicians Assistant.”

Floyd said that during that hospital stay, God showed her that there was a reason she surpassed the doctor’s expectations.

“Sometimes people will say that they don’t know what their purpose it but I do know what my purpose is,” Floyd said. “God put it in my heart when I was eleven-years-old and in the hospital. He is going to use me for something big.”

That calling from God to help others eventually included spending time at a homeless shelter in Myrtle Beach where she saw, as she did in the hospital, the power of taking time to get to know someone and encourage them in whatever hardship they might be experiencing.

“I volunteered at a family homeless shelter at the beach call New Directions where I tutored homeless children in a wonderful program called Freedom Readers,” Floyd said. “I met with them every Monday and I love my babies.”

She was connected with the shelter after a job shadow day when she followed her mom at her job helping underprivileged populations. Though she needed to volunteer to accumulate service hours for high school, it became so much more.

“I am in the Early College Program at Darlington High and I need a lot of service hours because of that,” Floyd said. “I told them that if they ever needed extra help at the shelters that I would love to help out. The director over New Directions said that she thought I’d be good with the kids so she got in contact with my mom and I’ve done it every summer. With everything that these kids have been through, you wouldn’t think that these kids would care about reading but they do.”

The summer before her senior year was the last time Floyd worked with the Freedom Readers program and Floyd said it was emotional saying goodbye.

After finding a career path that she wanted to follow, Floyd said that she made the decision to start taking classes at the Darlington County Institute of Technology.

“I was on track to get my Associates Degree,” Floyd said. “However, I decided last year to take classes at DCIT and get my CNA. I wanted to be in the medical field but I had never gotten my feet wet. I had been the patient but I never was the caregiver.”

Floyd said with her feet to the fire, she realized that her classes at DCIT were going to be a challenge but one that she would gladly rise to.

“I had Medical Terminology and it was in Latin,” Floyd said. “I never really had to study but when I got my first grade back in Medical Terminology I had to figure it out really quickly. The teachers there are amazing; they’ve helped me in every way possible. I realized that it was really hard but I love it. I love challenging myself.”

As she thinks about her future after high school, Floyd said that she is looking forward to college and what comes after with a lot of hope.

“I was very thankful for what the Honors College gave me,” Floyd said. “I will not have my degree but I will basically be entering college as a junior; there are just three classes I didn’t take that I’d need to get my degree. I am very excited but nervous at the same time. I’ve gotten this far so I think it will be okay.”