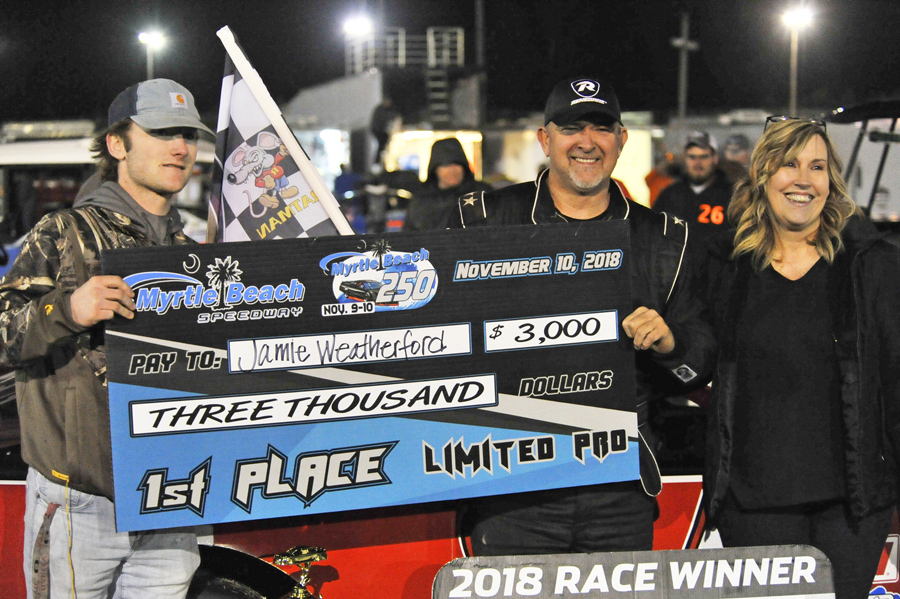 Prior to the race weekend, Weatherford, who calls Darlington County his home, tested at Myrtle Beach Speedway in preparation to compete in the NASCAR Whelen All-American Series Late Model Myrtle Beach 400. The test was a success, so he decided to compete in the 75-lap South East Limited Late Model race. He started the 75-lap race in eighth as 39 drivers took the green flag.

“We went down and tested a little bit Wednesday morning to try and get ready for (the Myrtle Beach 400) and decided at the last minute to try the small carburetor on it just to see how bad it hurt it, and it really didn’t hurt it near as we thought it was going to, so we decided to run,” Weatherford said. “We had very little practice. We had a really good car. I kind of felt like we were going to qualify a little better than we did. Anyways, it raced well. I was lucky to not get into any wrecks.”

As the laps ticked away, Weatherford found himself up front competing for a win. Josh Lowder, who had been dominant throughout the night, spun his tires on a restart with less than 10 laps to go. Weatherford took over the lead, and Lowder was later penalized by race control for an accident. Weatherford survived another restart before taking the checkered flag.

“We were trying to be conservative until around lap 60 or so,” Weatherford said. “That guy (Josh Lowder) had a ton of motor. I had already radioed in and told them unless we can beat him through the corner, we’ll never beat him down the straightaway.”

When restarting beside local racer Chris Chapman in the final laps, Weatherford felt more comfortable. Weatherford said, “I felt way more comfortable racing Chris than I did the other guys. When you race somebody you’ve never raced with, you never know how they’re going to do you.”

The win was an emotional one for Weatherford. His father, Roger, passed away at 73 after succumbing to cancer in February. The victory was the first for Weatherford since his father passed away. In fact, the win was his first at Myrtle Beach Speedway in a couple of years. Weatherford has come close in recent years of winning a race at Myrtle Beach Speedway, but for whatever reason, the team just hasn’t been able to put it all together.

“My dad got me started racing in 1979, and I never remember him not going to the racetrack unless he was sick and couldn’t make it,” Weatherford said. “But he wasn’t there. It has just been a hard year.

“We had a couple of races this year that I felt like we should’ve won. Took the lead on one of them and got spun with two or three to go from a guy I raced. I felt like I had raced him clean and then got dumped. I felt like a few times there we had a win. To do that and to dedicate it to my dad, it’s probably the most special win I’ve ever had.”

Weatherford is one of the few drivers who builds his own chassis and race with a three-link suspension, which makes Saturday’s win even more sweeter.

“Most people, they’re going to run a truck arm car. I guess when I built it, I was determined to try and make it, because I knew it worked good on the (Super) Trucks and Super Late Models.

“Other people had tried the truck arms on those and never had any luck with them to amount to anything, so I guess it made me more determined to make it work.

“We hit up here on something three races ago, and I guess with the Late Model Stock being a heavier race car, it just took a little different tuning than what we had done in the past on the truck stuff.”