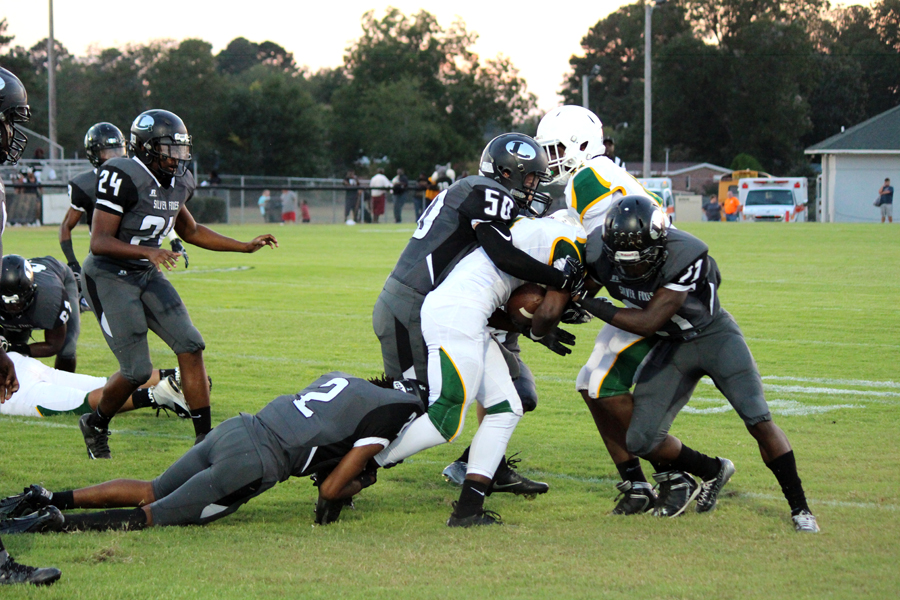 Lamar – It was business as usual for the Lamar Silver Foxes this past Friday night.

Despite a slow start that saw both teams scoreless after the first quarter, Lamar rallied behind its defense, starting with a pick-six by Malik Johnson to get the ball rolling and cruise to a 33-7 win over the North Central Knights.

“The defense played lights out; those guys came out ready to play,” Lamar head coach Corey Fountain said after the game.

Johnson’s interception, which came on the very first play of the second quarter, seemed to get things going for Lamar’s offense.

Clinging to just a 6-0 lead Lamar’s Jacquez Lucas was able to hit the big play the Silver Foxes have become so accustomed to over the last few years, running away from the Knights defense for a 79-yard touchdown with 4:57 left before the half.

Following the Lucas touchdown, the Silver Foxes defense struck again with Johnson getting his second interception of the game giving Lamar’s offense the ball on the North Central 48-yard line.

“Offensively we just have to start a little faster; we started a little slow tonight and it took us a while to get going,” Fountain said. “Once we got going we kind of hit a rhythm and in the second half were able to run between the tackles and our guys did a good job finishing out the game.”

But while offense did come around and score four touchdowns, it was the defense that really did all of the heavy lifting for the Silver Foxes.
Lamar finished the night with three interceptions plus it forced two turnover- on-downs when North Central had gotten inside the Silver Foxes’ 30-yard line.

North Central finally scored late in the fourth quarter on a 20-yard touchdown pass from quarterback Austin Bowers.
Lamar is now 4-0 on the year.