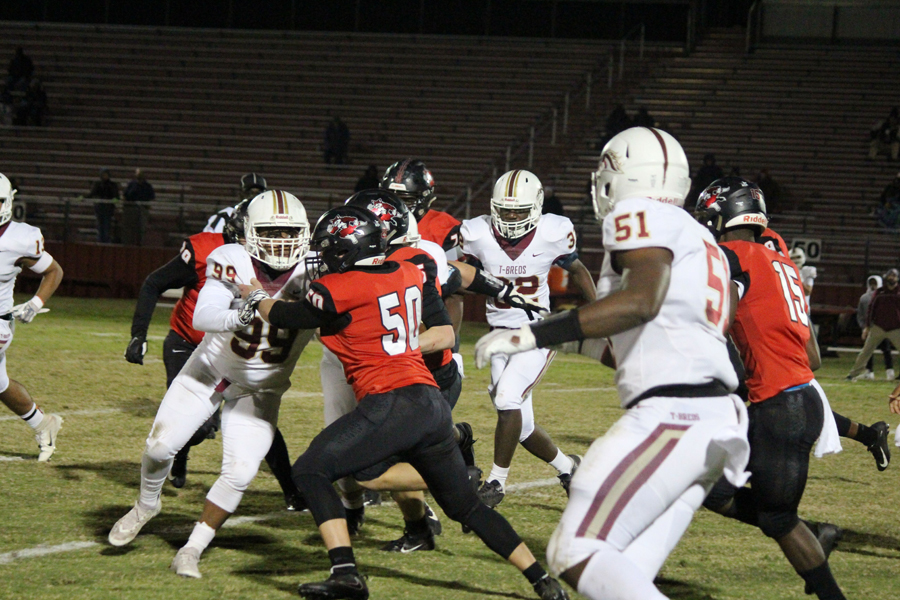 Down by 2 at the half, the Hartsville defense flexed its muscles, shutting out the South Aiken Thunderbirds in the second half and overcoming four turnovers on the way to a 28-16 win at home in the first round of the 4A playoffs.

“South Aiken has been snake-bitten all year,” Hartsville head coach Jeff Calabrese said. “They had a really good football team; they just couldn’t find a way to win a lot of games. Giving them four gifts like that in a playoff game, it’s kind of scary, but our kids found a way to win and you have to give them credit for finding a way no matter how ugly or pretty you advance to another round.”

The game had somewhat of a weird start for the Red Foxes. South Aiken started with the ball, but while it was unable to do anything offensively, it was able to pin Hartsville deep in its own territory on the punt.

It was that punt that would end up helping the Thunderbirds get their first score of the game. Unable to get out of the shadow of their end zone, the Red Foxes were forced to punt and it resulted in South Aiken getting great field position.

The Thunderbirds capitalized from the great field position, turning it into a 6-yard rushing touchdown to give South Aiken a 7-0 lead. The lead was short-lived, however, as Hartsville answered on its next drive, converting one fourth down before Owen Taylor scored from 4 yards out. 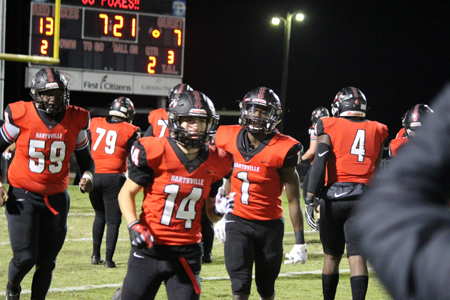 It looked like the Red Foxes were about to get rolling in the second quarter going up 14-7 when Taylor connected with Tate Hawkins for a 39-yard touchdown reception, making it back to back drives that Hartsville had scored.

South Aiken did not fold, however, after the Red Fox touchdown, answering with a 47-yard touchdown of its own on the next drive off a nicely set up screen. The Thunderbirds missed the extra point, however, keeping Hartsville in front 14-13.

With just a couple of minutes left before the half, Hartsville looked to extend its 1-point lead, but a tipped pass resulted in an interception, the first of four turnovers by the Red Foxes.

The Thunderbirds turned the Red Foxes’ mistake into points as South Aiken converted a successful 25-yard field goal with 25.4 seconds left before the half go up 16-14.

The third quarter was sloppy for both teams as Hartsville and South Aiken traded turnovers in the opening period of the second half. First, Hartsville fumbled, it’s third turnover of the game. The Thunderbirds followed that up with a fumble of their own on the ensuing drive only to have Taylor fumble it right back to them on the next play.

South Aiken was not able to do anything with turnover, however, turning the ball back over on downs. Following that it looked like Hartsville had fumbled again, giving the ball back to the Thunderbirds, but a roughing the passer penalty negated the turnover and the Red Foxes capitalized, scoring four plays later.

After the touchdown and a successful two-point conversion Hartsville went up 22-16 and it never looked back due to some great defense by the Red Foxes.

“They hit us on a couple of plays,” Calabrese said. “It wasn’t like we were playing bad defense, but just giving up points and of course the offense put them in a bad hole early in the first quarter, but really we were playing good defense and I think finding a way to play a great second half certainly helped.”

According to Calabrese, the strong defensive performance in the second half was not due to any adjustments that were made, but instead to Hartsville just being able to make plays.

“There weren’t a lot of adjustments to make,” Calabrese said. “I think we were basically in the right spot.

You know, sometime in the game of football you can be there and they just make a play, but it is not something that needs to be fixed and I think that is how we felt. It was like everything was in pretty good shape; we just have to make those plays and we found a way to do it in the second half.”

The Red Foxes added some insurance late in the fourth quarter when Dariyan Pendergrass broke off a 48-yard touchdown run with 1:17 left in the game.

Hartsville now goes on the road to take on Beaufort in the second round of the playoffs.