Meet the stars of Dancing with the Stars of Darlington County

Welcome to the runup to the 2019 edition of Darlington County’s Dancing with the Stars, an annual event that benefits the Pee Dee Coalition Against Domestic and Sexual Assault. The event will be held Thursday, Jan. 31, at 7:30 p.m. at Center Theater in Hartsville.

For the next several weeks, we’ll be introducing couples who will be taking part in the event. You can go to the Pee Dee Coalition’s website (www.DWTSofDC.com) to vote your favorite couple for the People’s Choice Award.

Photos are by Steve Roos.

Celebrity dancer Matt Nelson has called Hartsville home since graduating from the University of South Carolina in 2009. It is also his 10th year teaching at Hartsville High School. 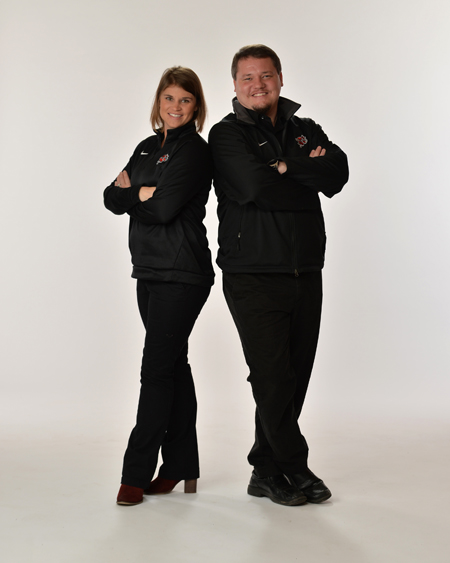 He is a social studies teacher at HHS. He is also the journalism teacher who prints the Paw Prints newspaper and produces their news show, RFTV. On top of his teaching responsibilities, he is also the director of the musical program at Hartsville High.

This will be his fifth year directing and eighth year of being involved with the program. Nelson was also the 2014-15 Hartsville High School Teacher of the Year. Part of his teaching philosophy is to provide students with the opportunity to become well-rounded people, and that is one reason why he decided to participate in Dancing with the Stars of Darlington County.

The other reason was to show his support for the Pee Dee Coalition against Domestic and Sexual Assault. He believes the organization does great things around the community and helps to prevent something that no child or adult should be a part of.

Professional dancer Tracee Auman is a graduate of the University of South Carolina with a degree in Advertising and Dance. She is a former competitive dancer and former member of the USC Modern Dance Company.

She is employed with Hartsville High School and is an instructor at the Brenda Cranford School of Dance. This is the third year she has been involved with Dancing with the Stars of Darlington County.

She looks forward to supporting this event and the Pee Dee Coalition each year. She is married to Donnie Auman and they have one daughter, Carmen.

Celebrity dancer Dennis Smith is a native of Charleston and a graduate of Francis Marion University.

He is married to Angela Smith, and they have two children, 14 and 16. He is employed with Sonoco Products Company as a business systems specialist. As a member of Center Baptist Church, he has served in several roles including Sunday school teacher and chairman of the Finance Committee. Smith is the former program director of the Center Community Coalition, a nonprofit serving at-risk youth. During his tenure, a community computer lab and mentoring program were started and operated for four years.

He enjoys serving the community and attempting to make a difference.

He has a passion for traveling and had the opportunity to visit Cuba and the Auschwitz Concentration Camp while working in Warsaw, Poland. He is honored to participate in this event, because it gives a voice to those who are sometimes forced to be silent.

Professional dancer Jadah Rush is a student at South Florence High School. She has excelled in the arts for many years in the areas of music, theatre and dance.

She has served as a cast member of Florence Little Theater’s 2016 production of “The King and I.”

She has studied for over four years under the instruction of Shantella Harris. Rush has been an exceptional member of several dance teams in the Florence area. She has performed at various events such as the Pecan Festival, Sankofa Festival and the FMU International Festival. She has served as dance captain for the SMS Dance Falcons and the Senior Performance Team of Driven By Dance Studio in Quinby.

She has danced competitively in the S.C. Southern Council Dance Masters Association and received a High Silver rating.

Rush is currently a dance team assistant and dancer for South Florence High School’s Bruin Elite Dance Squad and the Driven By Dance Senior Performance Team. In her spare time, she enjoys singing, drawing, track and field activities and participating in her school’s NJROTC program.