The Hartsville Police Department is moving ahead with plans to acquire an armored rescue vehicle. Despite lengthy debate during an Oct. 31 special meeting, City Council voted 6-1 to authorize Chief Jerry Thompson and his command staff to begin the acquisition process.

With approval of Resolution 10-18-02, HPD will apply to receive an armored rescue vehicle through through the United States 1033 Program, which transfers excess military equipment to civilian law enforcement agencies. The resolution specifically requested council’s approval for receipt of a Caiman MRAP 6×6 Armored Personnel Carrier/Rescue Vehicle. The vehicle itself would be free, and the city would pay for shipping, annual liability insurance, maintenance (performed by the National Guard), and fuel costs.

“The police department has already vetted this for us. They know what they need, or what they think they need. The iron is hot, let’s strike,” said Shirley, noting that he hoped the vehicle would never be deployed in an active shooter situation.

Mack called the MRAP (Mine-Resistant Ambush Protected) vehicles “very militarized” and said she had not seen an MRAP be “a savior in response time.”

To this assertion, HPD Major Mitch Stanley offered an impassioned rebuttal, citing the use of an MRAP to rescue police officers wounded in the Oct. 3 Vintage Place shooting. That incident saw gunman Frederick T. Hopkins, Jr. ambush seven City of Florence and Florence County officers, killing two. An MRAP vehicle from Effingham was used to evacuate the wounded, even as Hopkins continued to fire with assault rifles. 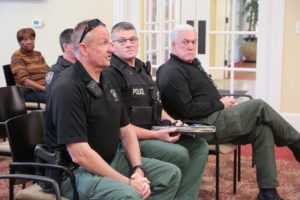 “If it wasn’t for this type of vehicle, instead of two officers losing their lives in Florence County, there would have been seven. That’s the only reason all seven did not die, because they were able to take that armored vehicle up there and save those people… that guy was shooting at the vehicle and (bullets) would not penetrate it,” said Stanley.

He said it would take about two hours for that same vehicle to get to Hartsville from Effingham, and that was too long to wait, especially if the vehicle is needed to respond to an incident at a school. Stanley added that the MRAP used in Florence had no weapons mounted on it and was “a de-militarized vehicle” intended only to save lives, which is what HPD wants to request.

According to online specs, the Caiman MRAP requested by HPD holds a crew of 10, has an electronically limited top speed of 65 MPH, and can cross water up to 36 inches without preparations. The resolution states that any MRAP vehicle acquired by HPD could be used for flood water rescue, as well as high-risk situations.

Observing that the specific request for a Caiman seemed to be a sticking point for some members of council, Andrews offered an amendment to the original resolution, removing the request for a Caiman MRAP and substituting the more general description “an adequate rescue vehicle” instead. The amendment and the resolution passed by a vote of 6 to 1, with Teresa Mack voting against.

Mayor Mel Pennington noted that Hartsville has no guarantee that an appropriate vehicle is available and it will take some time to pursue the process.