County Council clears the way for a new courthouse

Plans to build a new $14 million courthouse in downtown Darlington will move forward, as Darlington County Council voted unanimously at their Oct. 7 regular meeting to pursue the project.

With this vote on Resolution No. 709, council granted Darlington County administrator Charles Stewart permission to “engage and seek an engineering and architectural contract for the design, construction and completion of a new judicial center for Darlington County.” The proposed build site is on North Main Street, in front of the Historical Commission.

At a special meeting on Oct. 2, members of council and the public got their first look at artist renderings and floor plans for the new 38,000-square-foot building, which would feature improved security for judges and court personnel with a separate entrance and elevator, gated 15-space parking lot, and sequestered office space. 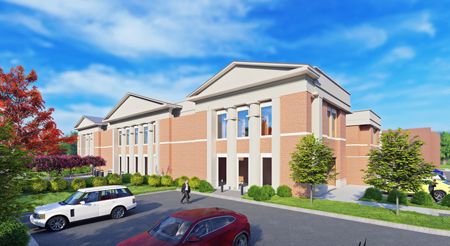 Expanded court facilities will allow for five judges’ offices, each with an administrative area and restrooms. General Sessions court would take place on the first floor, while the second floor would provide a main courtroom and separate waiting areas for Family Court. This would keep contentious parties away from each other prior to their hearings.

Three specific elevators will serve judges, criminal detainees, and the public. Stewart noted at the Oct 2 meeting that this will end longstanding concerns about citizens randomly encountering prisoners while in transit.

“This is a separation that we cannot achieve without installing two additional elevators in our current courthouse facility,” said Stewart.

The courthouse would also provide some much-needed public parking, with 46 new spaces planned in front, side, and rear lots.

Before the final vote, Council member Bobby Kilgo offered an amendment to the resolution, suggesting that for clarity’s sake the building be referred to as a “courthouse” rather than a judicial center. The balance of Council agreed with him and the amendment was approved.

“I am so happy that we have gotten this to this point,” said Councilman Le Flowers, after the vote. “It’s a wonderful design, and it is something we have needed for a very long time now.”

Kilgo singled out Stewart, Clerk of Court Scott Suggs, and Sheriff Tony Chavis for their teamwork on the project, which factored security concerns, space needs, and financial constraints and came up with a workable plan for a building that can be paid for through cash on hand in the county’s fund balance.

“Having a small group dedicated to the specific issue worked so much better than the other attempts we’ve tried over the last few years,” Kilgo said.

Stewart has said that the courthouse should be ready for use between 24 and 36 months from the construction start date.

Also on the agenda, Council approved second reading of Ordinance 19-19, which would grant special tax assessment status to rehabilitated historic properties through the “Bailey Bill” program. Qualifying properties must be at least 50 years old and meet one of the following requirements: Listing on the National Register of Historic Places; be designated a historic property by County Council; be located in an area that has been designated by County Council as a historic district.

Final reading of the “Bailey Bill” ordinance will take place at Council’s next regular meeting, scheduled for 6 p.m. on Nov. 4 at 1625 Harry Byrd Hwy in Darlington.