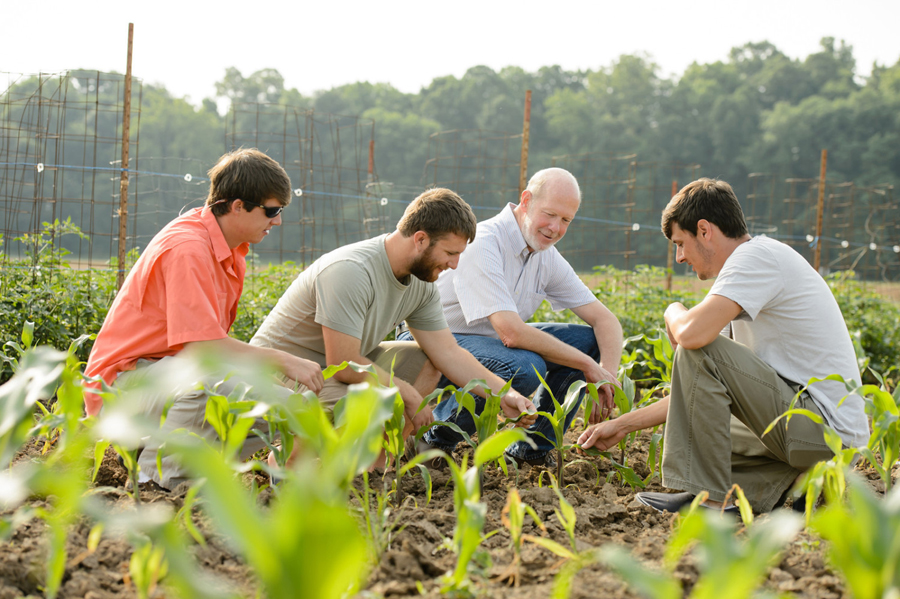 Rick Boyles (left) and Zachary Brenton, both of whom completed their Ph.D. work at Clemson University, work with Stephen Kresovich (second from right), director of Clemson’s Advanced Plant Technology Program, in a corn field at the Pee Dee Research and Education Center in Florence. Clemson University

CLEMSON – A concept born out of research from Clemson University’s Advanced Plant Technology (APT) Program is taking shape as a company that seeks to revolutionize regional agriculture by building a feed grain pipeline through the Southeast.

The company, Carolina Seed Systems, is working to address a lack of feed grain hybrid crop development and a regional feed shortage by creating a grower-focused company to take advantage of South Carolina’s unique environment to maximize crop productivity.

“Most of the seed companies are out in the Midwest, the Heartland,” said Zachary Brenton, Advanced Plant Technology alumnus and founder and chief executive officer of Carolina Seed Systems.

“Sorghum companies are mainly in west Texas, and that’s just not an appropriate environment to breed sorghum for the Southeast. So what we’re trying to do is leverage our unique environment so that we can ultimately increase crop yield and grower profitability, which in turn gives us the ability to also affect profit on the producer side of the animal industry in South Carolina.”

Carolina Seed Systems, a company that grew out of Clemson’s Advanced Plant Technology Program and has received licensing from the Clemson University Research Foundation, is working to address a lack of feed grain hybrid crop development and a regional feed shortage by creating a grower-focused company to take advantage of South Carolina’s unique environment to maximize crop productivity. Clemson University

Grain sorghum is a cereal grain that is often used as a substitute for corn and feeding rations in the animal industry. Because it is highly tolerant to drought and also efficient in its nutrient use, grain sorghum is a highly sustainable crop option for farmers that lowers their seed cost and increases their profitability.

As graduate students in Clemson’s APT Program, Brenton and Richard Boyles evaluated grain sorghum characteristics and began working to exploit natural variations in the plant’s genetic material to determine what genes are responsible for adapting it to the climate in South Carolina and the southeastern United States.

After completing their Ph.D. work, Boyles took a job as a research scientist at Clemson’s Pee Dee Research and Education Center in Florence, while Brenton left to pursue Carolina Seed Systems, which has licensed the intellectual property from Clemson through the Clemson University Research Foundation (CURF).

“Carolina Seed Systems is an excellent example of the student entrepreneurial culture here at Clemson University,” CURF Executive Director Chris Gesswein said. “The technical acumen and business instincts behind these guys is impressive. It’s a real joy to work with graduates who exhibit dedication, work ethic and tenacity in translating their academic research endeavors into a high-potential commercial enterprise. We appreciate the opportunity to facilitate and participate in these Clemson spinout opportunities.” 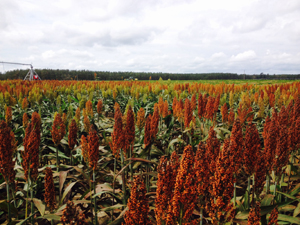 Grain sorghum is a cereal grain that is often used as a substitute for corn and other feed in the animal industry. Because it is highly tolerant to drought and also efficient in its nutrient use, grain sorghum is a highly sustainable crop option for farmers that lowers their seed costs and increases their profitability. Clemson University

Boyles said the concept for the company is “a vertically integrated supply chain,” meaning that both the university and Carolina Seed Systems would be integrated into the entire process from start to finish to best meet the needs of both ends of the supply chain — from grower to end-user.

“Basically, from the start when the seed goes into the ground to that end product, whether it goes into an animal or whether it goes into human food or any other products, we want to be involved in some capacity,” he said. “That allows us to stay in tune with what each sector of the supply chain is looking for, what their challenges are and then also how can we best fit into it and get better science and technology from the university out to companies like Carolina Seed Systems so that they can develop better products ultimately for the growers.”

The goal of the APT Program — part of Clemson’s Institute of Translational Genomics — is to improve agriculture in South Carolina one field at a time by employing translational, problem-solving science to advance crop agriculture in the state.

Because of the globalization and consolidation of the seed industry, South Carolina and the southeastern U.S. are underserved as a production region of critical importance to both row-crop and animal industries in the 21st century.

APT is a key part of an overall effort at Clemson to optimize plants for production in South Carolina and the Southeast for all agricultural stakeholders — from large-scale producers to small-scale landowners who work with heirloom varieties for restaurants, brewers and more.

Stephen Kresovich, director of the Clemson Institute of Translational Genetics and the APT Program, said Carolina Seed Systems is optimized to serve this regional niche.

“Carolina Seed Systems represents a product of the vision, innovation, technology and commitment of Clemson’s Advanced Plant Technology Program to the agricultural stakeholders of South Carolina,” said Kresovich, who also is the Robert and Lois Coker Trustees Endowed Chair of Genetics in Clemson’s plant and environmental sciences department.

“The vision and skills of Brenton and Boyles are uniquely targeted to turning advanced genomic and computational sciences into useful products for the farmers and consumers of the state,” Kresovich said. “Though grain sorghum for the regional animal industries is the initial product of Carolina Seed Systems, the real value to South Carolina agriculture is it will serve as a flexible 21st century agricultural technology company specifically serving the priorities of crop agriculture.”

Tim Lust, CEO of the National Sorghum Producers and United Sorghum Checkoff, said that the success of this program is delivering regionally adapted grain sorghum hybrids to farmers.

“Typically, the sorghum seed industry focuses breeding efforts in areas where more sorghum is produced in states such as Kansas and Texas, leaving potential growth areas such as the mid-Atlantic without diverse hybrid choices. Carolina Seed Systems has an opportunity to match local grain demand with tailored hybrids, which will increase grain sorghum productivity and, most importantly, increase on-farm profitability for sorghum producers.”

Steve Johnson, regional manager of the South Carolina Research Authority (SCRA), which supported the pilot production of the product through grant funding, said SCRA views Carolina Seed Systems as the “next generation” of agriculture in the state.

“While ag products have long been a major component of South Carolina’s economy, we were limited to planting cultivars developed by large conglomerate companies whose headquarters are outside of our state — and whose plants were not necessarily ‘designed’ for the unique growing conditions here,” Johnson said. “Carolina Seed Systems is changing that, developing hybrid cultivars that have high nutrition value and are specifically intended for South Carolina weather.”

Johnson also noted that Carolina Seed Systems is developing its products without being a genetically modified organism (GMO) product.

“SCRA has invested grant funding into Carolina Seed Systems because ultimately this will create new, higher-paying jobs in our state and build South Carolina’s reputation for innovation and entrepreneurship,” he said.

Brenton added: “Carolina Seed Systems has gotten support also from the South Carolina Research Authority because multiple state entities across South Carolina view this as an opportunity to improve the mission of the S.C. Department of Agriculture of hitting $50 billion dollars of economic impact by 2020. So it’s not just the grants that we receive; it’s really the support that Clemson and the vision of APT program that are the driving support of this.”

And while increasing crop productivity and limiting the environmental impacts of agriculture, the ultimate goal of the company is to increase the number of feed grains available to end-users by working with growers to create better product lines.

“The Carolinas import about 300 million bushels of grain sorghum per year,” Brenton said. “Rather than having that come through the ports of Wilmington or Charleston or railed in from the Midwest, we’re trying to make our acreage more productive so that our growers can take advantage of that revenue. It’s a local agricultural play to help growers achieve their maximum profitability. And that’s addressing the growing challenges that we have facing world agriculture.”

Carolina Seed Systems saw grain sorghum as the first opportunity and used the Clemson APT Program to explore it, but the company has plans to diversify its product line and provide other opportunities for growers in the future.

“The vision of Carolina Seed Systems and even here at Clemson University, we’re not just working on sorghum, but also any crop that’s a good fit for the state, for the region and elsewhere,” Boyles said.

It only stands to reason that growing sorghum or any other crop closer to its end-user improves sustainability by decreasing transport costs and the environmental impacts associated with it while at the same time lowering costs for the end user — improving the bottom line for both the grower and end user.

“APT is the driving force on this at Clemson, and they’re looking for opportunities and commercial partners, not just CSS, but anybody that wants to pursue that to the benefit of a South Carolina agriculture. So we think it’s a critical component of the land-grant mission at Clemson.”