Cruising along Highway 151 between Darlington and Hartsville, you may have noticed two rather tall and rather unique plants towering in the sky, their crowns peaking around the tallest power line. Known as century plants, the agave americana (aka American Aloe) is a species of flowering plant in the Asparagaceae family. Though it is native to Mexico and the southwestern US, this ornamental plant has become naturalized in many regions around the world – including the hot and humid southeast. 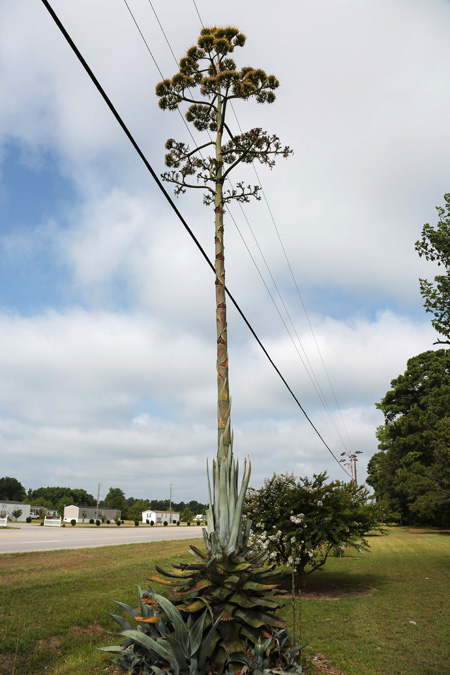 These two lanky local specimens belong to Mr. Charles E. Boyd Sr., who received a number of century plants from his father as wedding gifts in 1993. The roadside bloomers are perhaps 15 to 20 years old, and are not the original plantings, which flourished and died away years ago. Boyd has several century plants in his yard, and these two are just the latest to attain such heights.

The name century plant is a bit of a misnomer, as the plant’s lifespan is usually between 10 and 30 years. The base of a mature plant will spread around 6 to 10 feet and sprout numerous grayish-green leaves, which can grow to five feet long. Each leaf has prickles around the border and a sharp spike at the end, making nearby yard work somewhat hazardous for the inattentive.

When a century plant nears the end of its life, it sprouts a tall and multi-branched stalk from the center. The stalk can grow up to 30 feet high, and each branch sports puffs of yellow blossoms. After this glorious skyward stretch, the plant dies, but it produces suckers and shoots which can be planted to produce more of these oddball wonders for future generations to enjoy.