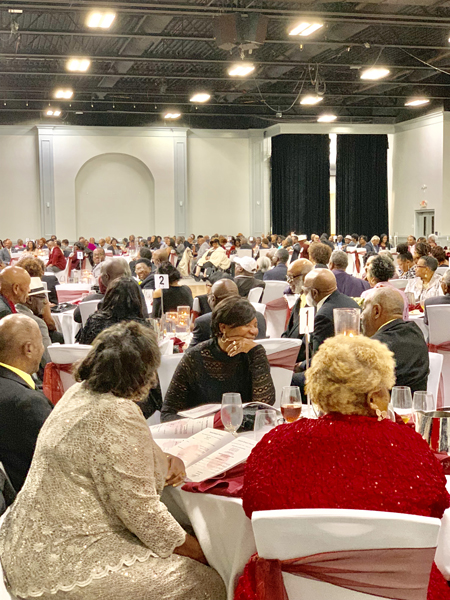 Since 1979, Rosenwald alumni and friends have been gathering for an all-class school reunion. In 1994, it became biennial.

On the first day of the event, the Indoor Tailgate was held at Darlington Middle School Gym. Saturday morning, Oct. 27, alumni headed to Darlington High School for a Reunion Brunch in the school’s cafeteria.

That evening, the Reunion crowd gathered at the Florence Center for its banquet. William K. McCall (’81) served as Master of Ceremonies. Attention turned to the presentation of Rosenwald’s first Lifetime Achievement Award. Patricia T. Thomas (’74) had the honor of presenting the award to Willie “Bill” Boyd, who had served as Rosenwald’s last principal and retired after 50 years of leadership as a Darlington County school administrator while holding the rank of Interim School Superintendent.

Each inductee was presented with an official gold-bordered certificate with an embossed gold eagle and a Rosenwald golden eagle lapel pin. Other inductees who were not able to attend the banquet with their respective classes in previous years included: Johnny Williamson (’64), Charlie Robinson (’65) and Mary Sanders Grant (’66).